It was 15 years ago today that the name of pilot Konstantinos Iliakis joined those of Greek military personnel over the years who fell in the line of duty while protecting the country.

It was 23 May 2006 when the 35-year-old Hellenic Air Force pilot lost his life as his plane crashed on Karpathos island in the Dodecanese.

He had been trying to intercept Turkish fighter jets which had entered Greek airspace over the Aegean.

A Turkish aircraft hit Iliakis’ F-16 at its right wing, causing an incontrollable spin into the sea. Both planes crashed, but the Turkish pilot survived using the ejection seat, and was rescued by a Panamanian ship that was near the area at the time.

According to Greek pilot reports, the Turkish pilot was one of many from an infamous Turkish Air Force squadron, whose pilots were consistently responsible for multiple near misses in the Aegean due to their disregard for flight safety.

The incident caused military tension between Greece and Turkey. 40 Hellenic Air Force fighters took off to secure the airspace over the crash, as dozens of Turkish rushed to the scene.

After a tense stand-off the two countries disengaged, after the leaders of the respective armed forces Admiral Panagiotis Chinofotis, and General Hilmi Ozkiok spoke in an emergency phone call.

Shortly after the remains of his crashed F-16 were found suspicions were raised that the Turkish pilot may have shot Iliakis down. The suspicions, however, were never confirmed.
The dead pilot, a father of two young children, was of Cretan origin, from Kastello, Rethymnon.

On 28 Dec. 2006, the Academy of Athens posthumously awarded the Hellenic Air Force hero with a medal for his self-sacrifice.

On 20 May the following year, a statue of Iliakis was unveiled in Akrotiri of Agios Mattheos, Chania.

Shockingly, the bronze statue was stolen on 2 Dec. 2012 but was eventually returned by the 18-year-old perpetrator who had claimed he took it for scrap because of poverty. 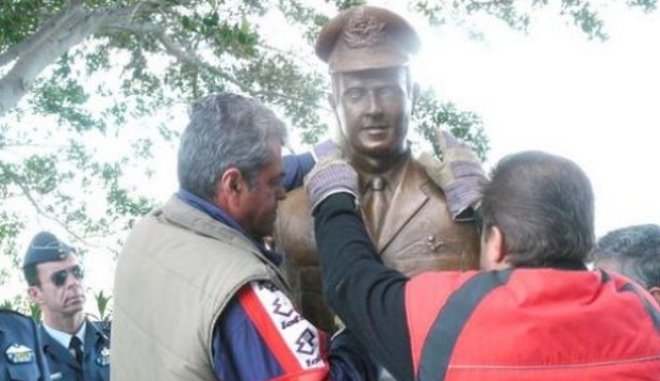 Giorgos Baltadoros was the fighter pilot who died April 12, 2018 when his Mirage 2000-5 plane crashed into the Aegean, after a mission intercepting Turkish jets which had violated Greek airspace.

To honor the fallen hero, the Hellenic Air Force recently installed a Mirage fighter aircraft at Baltadoros’s birthplace of Morfovouni, a picturesque village near the town of Karditsa, Thessaly.