On Tuesday Europol officers in Brussels arrested a leading member of the fascist Golden Dawn Party, Ioannis Lagos, who has been evading arrest due to the immunity offered by the European Parliament as an elected MEP.

The move follows Greece’s issuance of an arrest warrant after the plenary of the European Parliament voted to strip Lagos of his immunity.

Late on Monday, MEP’s voted overwhelmingly to take away his parliamentary privilege. Altogether, 693 European lawmakers voted, out of which 658 voted in favor of the lifting of immunity. 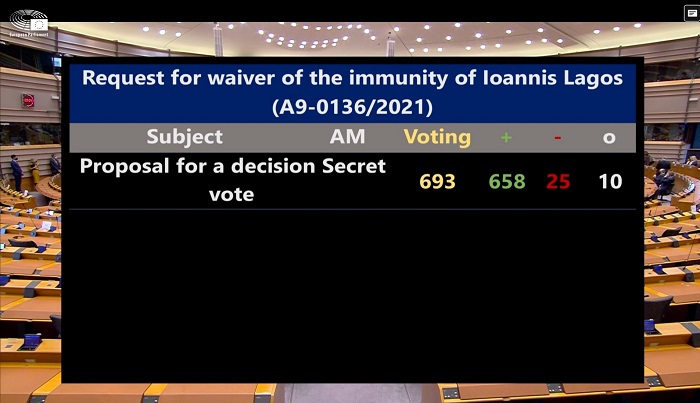 Lagos was sentenced by a Greek court in October of 2020 for his part in leading the group, being a close confidante of Golden Dawn’s leader Nikos Michaloliakos.

He received a prison term of 13 years and eight months. Greek judicial authorities sent a request to Brussels that his political immunity be lifted.

Decision could lead to Lagos imprisonment

This decision paves the way for the imprisonment of Lagos, who remains free in Brussels six months after the court ruling of his imprisonment due to his immunity as a Member of the European Parliament.

Lagos, 48, left the Golden Dawn party in July of 2019 claiming disagreement with certain political moves of the party. He is currently an independent member of the European Parliament.

The Greek MEP was already penalized by President of the European Parliament David Sassoli after tearing up the Turkish flag in the House during a speech on illegal migration in January.

Lagos’ salary has already been reduced substantially since the flag-ripping incident as well. The MEP receives only his salary of 6,000 euros a month and none of the other compensations.

According to European Parliament regulations, he will continue to receive the MEP salary, without extra compensations, even during his prison stay, until the Supreme Court decision is finalized.

Lagos served as a member of the Greek Parliament from 2012 until 2019, elected on the Golden Dawn ticket.

In July of 2019 he was elected to the European Parliament, only days after he announced that he would sit as an Independent.

The nationalist politician was arrested and detained twice on charges of forming a criminal organization.

In the past he has been charged with extortion, pandering, protection racket practices, illegal possession of firearms and other felonies.

Lagos was also charged as an abettor in the murder of rapper Pavlos Fyssas in September of 2013, which led to his conviction, along with the rest of the Golden Dawn leaders, on October 7 of last year.

After the largest trial against a fascist group since Nuremberg, an Athens court convicted members of the far-right neo-Nazi political party Golden Dawn of operating a criminal organization in a historic decision.

The Greek court handed down sentences to the 57 people convicted in the trial of running a criminal organization and for the murder of anti-fascist rapper Pavlos Fyssas.