The Lost Art of Traditional Basket Weaving in Greece

The traditional handicrafts and folk arts of Greece were initially born out of necessity, yet they are also objects of remarkable beauty. One of the oldest crafts from antiquity which is still appreciated today is basket weaving. Once used by beekeepers who wanted to make artificial hives for wild bees, the skill of basket weaving is now a dying art.

The supple yet tightly woven, scented willow baskets made from reed and osier that adorn tourist shops on most islands are a happy reminder that these skilled crafters are still in demand. Basket weavers are still around on the islands to repair taverna chairs and other cane furniture, as well as sell their decorative and practical baskets to tourists during summers.

One such basket weaver is grandfather ‘Kyrie’ Adonis from Volax on Tinos island. He has been crafting traditional coppiced baskets “since he was a twelve-year-old child,” he said.

Volax Village on Tinos is one of the most charming and picturesque villages in the Aegean with its classic Cycladic architecture and mysterious smooth geographic rocks. His store has been visited by many sightseers over his over 60-year career. 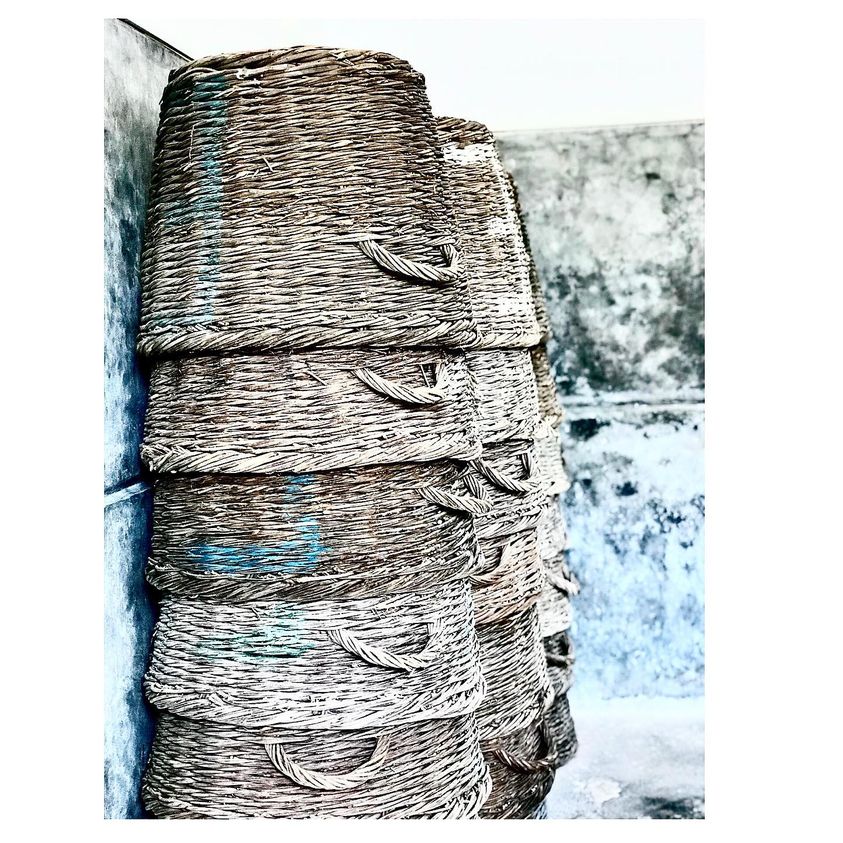 How traditional baskets are made

While not requiring any tools, making a traditional basket is not as easy as it appears. First, you must collect the sticks from withy tree (a strong flexible willow stem, typically used in thatching and gardening) around mid-July to mid-September and strip them of their outer layer. They are then placed in the sun to dry out and later immersed into cool water to give them elasticity. In January, the cane is usually ready to be collected, and the long slender shoots will then be twisted and bent around nimble fingers for the “over-one-under-one” work.

It takes 12 rods of osier tightly wound into circles to form a skeleton. The wicker weaver then places 12 canes on the ground open in a star formation and starts to knit through three rods until about 30 cm high. He or she then bends the osiers and puts them in a guide of the same diameter, and continues knitting for another 5 cm. To give the basket color and texture, she or he weaves with split reeds for about 20 cm more. When this is done, a type of girdle is made to make the basket more durable, and then another 20 cm belt is weaved to finish.

While traditional baskets are sold almost everywhere in Greece, specific villages where weaving is revered as a lost skill are in Drymalia and Keramoti in Naxos, the town of Anogia in Crete, and Methana in Argolida, to name a few, where they make small baskets lined with olive leaves, soaked in retsina to smoke fish on the BBQ.

There is also an excellent basket weaving Museum in Komotini, The Basketry Museum of the Roma, specializing in the people from different countries of the Balkan Peninsula (Greece, Turkey, Bulgaria, Albania, Serbia, and others) and the rest of the world.

A calathus ‘κάλαθος’ was a basket in the form of a top hat used to hold wool or fruit, often used in ancient Greek art as a symbol of abundance and fertility.