The Greek Food Trucks Taking Over the Streets of New York 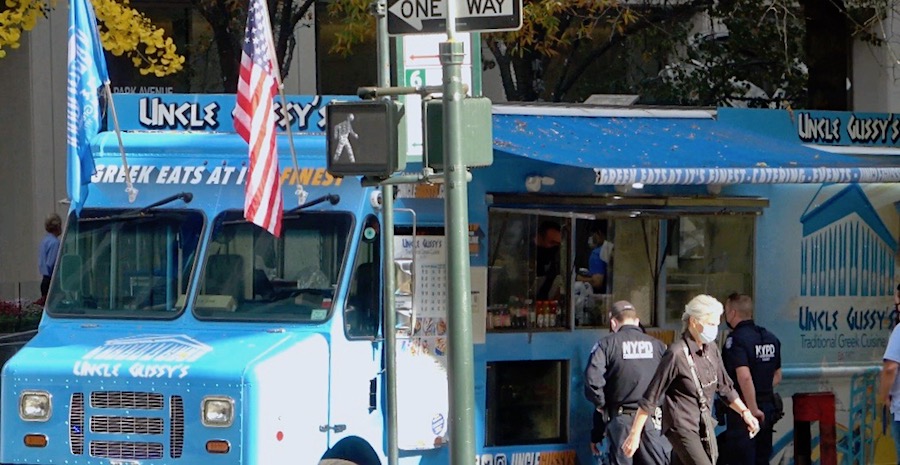 Any visitor to New York City has probably noticed the many food trucks offering inexpensive, tasty fare to New Yorkers looking for a quick bite on their lunch breaks or while exploring the city.

While these food trucks offer tasty cuisine from all over the world, Greeks have been dominating the field with their delicious, authentic plates for years.

New York’s rich immigrant history, from the millions who entered the country through Ellis Island in the nineteenth century to the more recent waves of arrivals from Asia, Africa, and Latin America, has contributed to a vibrant food culture in the city.

New York City’s culinary diversity reflects its own international population, which represents nearly every country in the world.

Visitors to the city, an international culinary capital, can easily find traditional dishes from around the world on every corner, either at high-end restaurants or diners — or even food trucks.

Serving up classic Greek dishes ranging from gyros to authentic pitas, Greek food trucks have long been a staple at the corners of the busiest streets in the city.

Residents of New York City, known for their discerning palates, understandably love Greek food trucks. They gush over the benefits of the Mediterranean diet and the delicious, reasonably priced food served at the trucks, seemingly dotted along every major street in the city.

That’s why they are so successful in a city where it is notoriously difficult to “make it” — they serve some of the best food in New York, at a price that is hard to beat in one of the world’s most expensive cities.

“Americans love Greek food. They recognize the patience and love we put in our food,” said Antonis Tsampas, who runs the King Souvlaki food truck in Astoria, Queens. King Souvlaki started when Tsampas’ grandfather, Lefteris, sold meat skewers from a cart in the neighborhood. The tiny business grew into what is now one of the most popular Greek street food business in the area.

Nicko Karagiorgos, operator of Uncle Gussy‘s food truck in Midtown Manhattan, argues that the quality of the food is most important — “we have to make sure everything’s clean, everything’s high quality… we’re Greeks, that’s what we do!”

Uncle Gussy’s is a favorite of officers belonging to the NYPD and the many businessmen in New York’s bustling midtown, the country’s largest commercial, entertainment, and media center.

Greek-born and Greek-American food truck owners contend that, although it is a difficult job, serving delicious Greek food to hungry residents is worth the long hours and often taxing working conditions.

Elpida Vasiliadis, known as “The Souvlaki Lady,” has operated her food truck, a staple in Astoria, for over 30 years. Speaking to Greek Reporter, she stated that, although New York summers are brutally hot and the winters unbearably cold, the relationship she has built with the community makes the job worthwhile.

Throughout New York City’s history, food has long been used as a way of cross-cultural communication and understanding. Sharing your favorite traditional meal from your home country is a sign of love and familiarity, while trying the dish of a neighbor can lead to a deeper understanding of where they come from and the values they hold dear.

Greek food truck drivers do the same thing when they serve their food to the public, offering elements from their ancestral homeland to New Yorkers, forming tight bonds with the community and showing the world what it means to be Greek — to be hardworking, generous, and kind.

Greeks have long been a significant immigrant community in New York City, most notably in Astoria, where immigrants from mainland Greece flooded in the middle of the twentieth century.

The Greek atmosphere in Astoria can be felt throughout the neighborhood, where Greek is heard all around and Greek bakeries, cafes, stores, and restaurants line the streets.

The Legendary Greek Priest Who Served Four Generations of Canadians