By Patricia Claus
December 7, 2020
Facebook
Twitter
WhatsApp
Linkedin
Email
A moving testimony of the love and gratitude that cats have for their human companions is being demonstrated every day now in the Greek cemetery of Astros Kynourias in the Peloponnese, as a rescued feline can be seen spending his days sitting on the graves of his former owners.
A man named Antonio Douros and his wife, Giota, unfortunately passed away this past Spring, only one month apart.

Making the situation even more tragic is the fact that after the death of the couple, no one could locate the kitten, called Chatziko, which had been adopted by them just months earlier.
It seemed to have disappeared entirely despite the fact that townspeople were actively looking for the animal in hopes that it could be taken care of.
A story appearing on Greece’s SKAI news channel this weekend showed the happy outcome of the story, however, as local priest Father Stavros Delimanolis explained to interviewers that, out of the blue, the cat had suddenly appeared at the cemetery, making himself at home on the grave of Mr. and Mrs. Douros.
Luckily the cemetery workers recognized the now-homeless animal and it was allowed to stay at the cemetery and keep his former owners company. He has now settled in the cemetery, where he lives permanently. 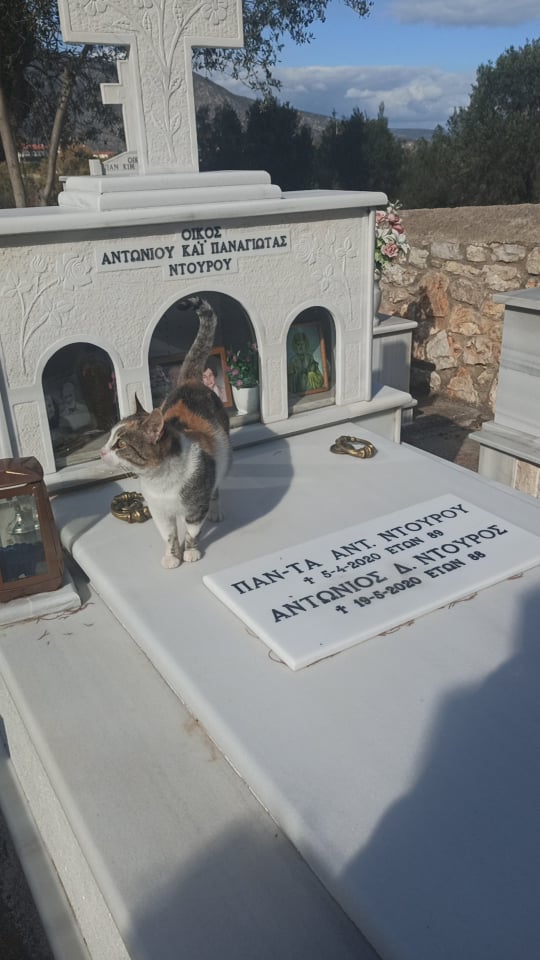 The people working at the church feed the feline daily and have even set up a house so it may sleep safely there while continuing to pay his loving tribute to the couple who had taken him in and given him a home when he needed one.

Odyssey, Homer's classic was recently banned in Lawrence, Massachusetts for portraying ideas that do not conform to modern norms of behavior.
Culture

Growing up Greek-American you are privy to a unique childhood, filled with some pretty strange customs (strange to those who are not Greek, anyway).
Education