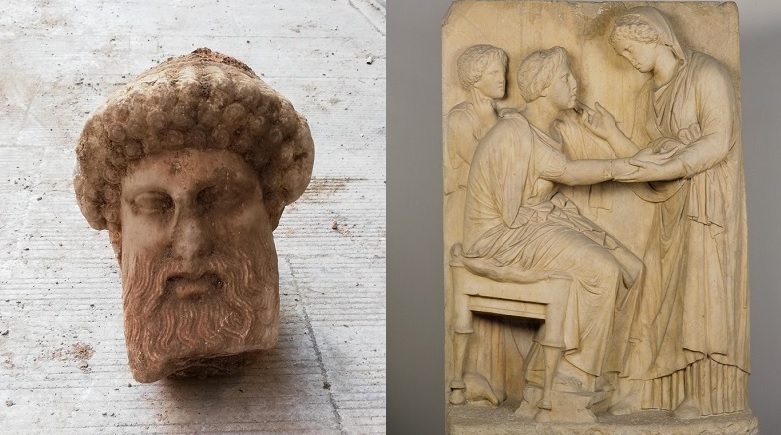 The recent construction work on Aeolus Street in Athens has uncovered some astounding archaeological treasures from ancient Greece on which the Ministry of Culture has now begun restoration.
The news of the recent discovery of the head of Hermes on Aeolus Street, at a depth of just 1.3 meters (4 feet 4 inches), has been reported around the world.
But imprints of history are continually being revealed in every part of Athens. On the occasion of the discovery of Hermes, the Ministry of Culture is compiling a brief history of the area and the important findings there.

Aeolus Street is about 800 meters (2,624 feet) from the foot of Acropolis Hill. The noisy, busy street in the bustling heart of Athens was created as far back as the archaic period. It has played a prominent role in the timeless history of ancient Athens, as evidenced by excavations that began in the late 19th century.
According to research by the Director of the Ephorate of Antiquities of Athens, Eleni Banou, there are two important elements that certify the continual use of today’s street as a public way, starting in archaic times.

The emergency excavations of the 1970s that were carried out on a plot of land at 65 Aeolus Street by the Ephorate of Antiquities brought to light a large part of an ancient road with seven overlapping roads atop it.
The great discovery in the 1980s, during the renovation of Kotzia Square and the expansion of the building of the National Bank, was the Acharnian Gate in the Themistocles Wall.
The gate is located in the extension of the ancient road and today’s Aeolus Street, with only a small byroad to the west. Apparently this ancient road led to the gate to the north of the city and from there, outside the walls, it led to the most populous ancient municipality, Acharnes.
Across the spot where the head of Hermes was found, near today’s Church of Agia Irini, a unique find of amazing artistic beauty was recovered from the earth in 1885: The statue of a naked young Hercules holding on his left shoulder a lion, with its head showing and the legs of the animal obscured under the rugged chest of the demigod.
The small (0.54 meter, 1.7 foot) statue of Hercules of Aeolus, which is on display at the National Archaeological Museum, is the new model of a peaceful but troubled and anxious man in the “international” environment of the Hellenistic-Alexandrian era. An environment that was an ideal breeding ground for the development of new philosophical, social, political and religious movements such as Christianity.
It is very likely that the statuette of Hercules, dating to the end of the 4th century BC, adorned a sanctuary, dedicated either to Hercules or to an unknown deity. Today, on the site the statuette was found, is the beautiful church of Agia Irini.

Other important finds from the 1970 excavation are the fragment of a tombstone of classical times as well as a tombstone of the early Roman period.
According to Banou, on the curb of the ancient road that was developed since the end of the 5th century BC, there was a roadside cemetery, which was a common practice of the ancients.
Another tombstone found a little further west on today’s Athena Street demonstrates the extent of the Classic-era cemetery. Today it is also among the exhibits at the National Archaeological Museum.
A work dating back to 350-325 BC, it impresses with the immediacy of its subject. The deceased woman is shown sitting on a stool, extending her hand to a relative who is holding it tenderly and addressing her, while she raises her other hand.
To the left stands a pensive girl. A partridge pecks under the dead woman’s seat. The monument, known as the “Farewell column,” onriginally had the form of a nave with a pediment, pilasters and pedestal.

The ancient street — today’s Aeolus — would surely have other sacred monuments as well, judging from the fact that two other Christian churches, the Assumption of the Virgin Chrysospilaiotissis and the Holy Monastery of Agia Paraskevi are situated next to the monastery of Osios Meletios, north of Agia Irini on this same street.
The new religion is known to have followed in the footsteps of the old, with churches often built atop the ruins of ancient temples and sacred sites.
When Athens became the capital of the Greek state, the ancient/Byzantine road played an important role once again.
The street became the main artery leading to the most important monumental complex of the city, the Acropolis. It was then named after the wind god Aeolus, because it started at the Clock of Andronikos Kyrristos inside the fenced archeological site of the Roman Agora, built in the second century BC, which was dedicated to the winds as a sundial and water-powered clock.