GRNews
GreekReporter.comGreek NewsCyprusSuspect in Murder of Cypriot Protester Proudly Poses Next to Erdogan

Suspect in Murder of Cypriot Protester Proudly Poses Next to Erdogan

The man accused in the killing a Cypriot protester in August of 1996 was seen standing proudly next to Turkish President Recep Tayyip Erdogan during his visit to the occupied territories last weekend.
Kenan Akin, who was Minister of Agriculture and Natural Resources of Northern Cyprus at the time, was identified by the Cyprus police as the main suspect for the shooting of Solomos Solomou.
The victim was killed while trying to climb a flagpole in order to remove a Turkish flag from its pole in Cyprus’ United Nations Buffer Zone. 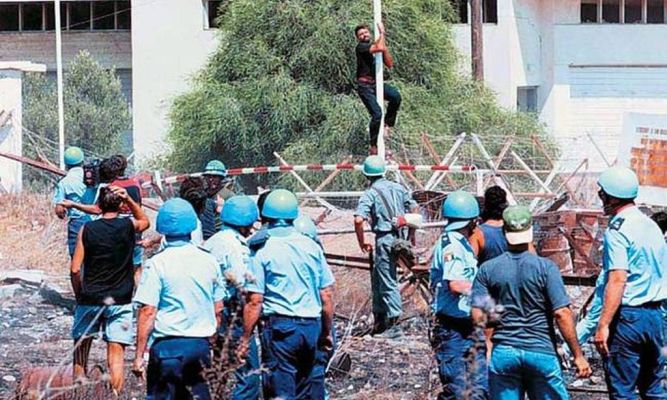 According to Cyprus Police, Solomou’s killers were Kenan Akin and Chief of Special Forces of Northern Cyprus Erdal Haciali Emanet. Warrants were issued by the Republic of Cyprus for the arrest of Akin, Emanet, and three others.
In October 2004, Akin, wanted by Interpol for the murder of Solomou, said the former Turkish Military Commander Halil Sadrazam had given the order to shoot. Sadrazam denied the accusation.
Akin was later arrested in Istanbul on unrelated smuggling charges. He was released by Turkish authorities despite being wanted for murder by Interpol.
The photo of Solomou climbing the Turkish flagpole has often been used as a symbol of protest against Turkey’s military occupation of northern Cyprus.
Solomon Solomou was praised by a number of Greek politicians, and several prominent Greek composers and singers dedicated songs to him.