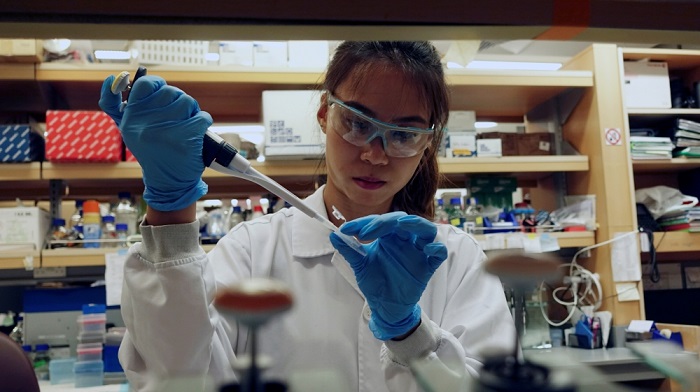 In another hugely important piece of coronavirus news after last week’s bombshell revelation that the Pfizer company’s vaccine had proven to be 90% effective, on Monday Moderna announced that its own vaccine has shown so far that it has 95% effectiveness in trials.

Officials from the United States pharma giant stated jubilantly that today was a “great day,” and they will shoot for applying for FDA approval in the next few weeks. Both firms developed their vaccines using extremely unusual and innovative means, employing RNA to fight the virus.

So far, the Moderna vaccine has results from 30,000 trial subjects, half of whom were given two doses of the vaccine — four weeks apart. The Pfizer vaccine also must be given two separate times, with 28 days between each shot.

Like Pfizer, Moderna also used a control group, which was given a placebo shot.

In the course of the trials, eleven people developed cases of severe Covid-19 — but none of those individuals had received the actual vaccine.

“The overall effectiveness has been remarkable… it’s a great day,” said Tal Zaks, the chief medical officer at Moderna, to interviewers from the BBC.

“We are going to have a vaccine that can stop COVID-19,” Moderna President Stephen Hoge said in a telephone interview with Fox News.

Moderna, another of the firms, along with Pfizer, which took part in the U.S. government’s $1.95-billion “Operation Warp Speed” program, expects to produce around 20 million doses of the vaccine for the United States this year. Millions of doses have already been created — they simply await FDA approval before they are shipped to a desperate public.

Almost Immediate Shipment After Approval, Thanks to Operation Warp Speed

“Assuming we get an emergency use authorization, we’ll be ready to ship through Warp Speed almost in hours,” Hoge told reporters. “So it could start being distributed instantly.”

Both the Pfizer and the Moderna vaccine were created using similar means, with part of the virus’ genetic code, or RNA, used in the injection in order to create an immune response after T-cells, the workers of the immunological system, begin to create a defense system against the virus.

Researchers stress that since the late-stage trials are still continuing, the final effectiveness rate will most likely change from 90% for the Pfizer shot and 95% for the Moderna vaccine.

One aspect that has worried Pfizer researchers is that their medication must be stored in what is considered ultra could storage — minus 75 C — although it can then be kept refrigerated for five days subsequently.

The Moderna vaccine has the added improvement of only needing to be kept at minus 20 C — for up to six months. It can then be stored in a refrigerator for up to one month.

At this point, naturally, there is no way of knowing exactly how long the immunological protection will last since there hasn’t been enough time to track this characteristic. Researchers have reportedly hinted that it does indeed protect the elderly, who are most at risk when they do develop Covid-19.

In the BBC report, Zaks stated that Moderna’s research at this point suggests that the vaccine “does not appear to lose its potency” with the aged.

It is also too early to tell if the vaccine simply prevents people from becoming severely ill with the coronavirus or whether or not it will also prevent them from spreading it as well.

Professor Peter Openshaw, from Imperial College London, stated that the reports of minor amounts of fatigue, headache and pain which some subjects stated they experienced after the shots were only what is to be expected after any immunization.

“These effects are what we would expect with a vaccine that is working and inducing a good immune response,” he said. “This news from Moderna is tremendously exciting and considerably boosts optimism that we will have a choice of good vaccines in the next few months.”

Who Will Get the Vaccines – And When?

Moderna will soon by applying for FDA approval and as soon as it receives the go-ahead it will produce 20 million doses for US use.

However, during 2021, the firm says that it expects to be able to produce up to one billion doses of the vaccine in 2021 and will seek approval for its use in countries around the globe.

At present the UK government is in negotiations with the US Pharma giant since its vaccine had not been one of the six that it had already ordered. The elderly will be the first individuals in the UK to receive the shot when it becomes available.

The University of Oxford’s Professor Trudie Lang stated to interviewers that “It is very good news indeed to see another vaccine coming through with similar efficacy results as were reported last week from Pfizer.

“This is also an interim analysis, which means that there were enough cases within the vaccinated volunteers to give statistical significance, and allow the team to break the blind to determine who had the active vaccine and who had a placebo.”

We just announced that mRNA-1273, our COVID-19 vaccine candidate, has met its primary efficacy endpoint in the first interim analysis of the Phase 3 COVE study.
Read more: https://t.co/vYWEy8CKCv pic.twitter.com/YuLubU1tlx

Daniel Craig, the famous and beloved around the world English actor, is expected to come to Greece in June this summer to participate in the filming of the sequel of the film ''Knives Out.''