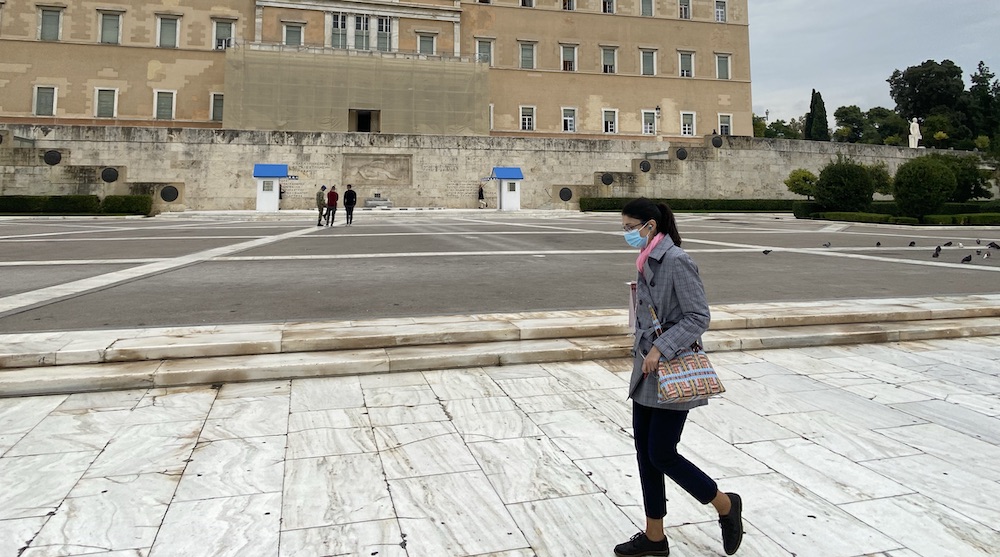 A record-breaking 2,917 cases of Covid-19 were diagnosed in the country on Thursday, and 29 deaths were recorded in those who had suffered with the virus.
This is the highest number of coronavirus cases recorded in a one-day period in Greece. The previous record was broken yesterday, Wednesday, when Greek health officials announced that 2,646 cases had been  diagnosed in the country.
Additionally, Thursday’s 29 deaths and 187 intubated patients were record high numbers for the country.
On Wednesday afternoon, Greek Prime Minister Kyriakos Mitsotakis announced a second lockdown in the country, following the first one in March and April, due to the rapid spread of the virus.
Citizens will have to wear masks at all times outside of their homes, and will have to alert the government when they leave their homes by sending a text message or carrying an official document saying where they are going.
Under the lockdown, which will start on Saturday morning and last until November 30, movement is limited to shopping for food and medicine, exercise, walking with pets, going to and from work, helping others in emergency situations, or going to the bank.
Although he hoped to avoid such drastic measures, Mitsotakis urged citizens that the move was necessary, saying, “The exponential increase in cases forces me to take action now. I cannot take responsibility for endangering human lives.”
Of the total new cases announced on Thursday, 27 were identified during testing at Greece’s points of entry.
Since the start of the pandemic, a total of 49,807 cases of Covid-19 have been recorded in Greece, including all those who have recovered from the virus. Of this total, 4,303 are associated with foreign travel and 14,879 with contact with a known case.
Currently, there are 187 intubated patients in intensive care units around Greece, causing concern about strain on the country’s healthcare system. The median age of these patients is 66, and just 43 are women.
Of the intubated patients, 90.4% are over the age of 70 or suffer from preexisting conditions. A total of 310 patients have been discharged from ICUs in the country.
The 29 new deaths recorded on Thursday bring the number of total fatalities in Greece to 702. Of those who lost their lives after suffering with the virus, 275 have been women.
The median age of those who have died with the virus is 79, and over 96% of those who passed away were over the age of 70 or had underlying health conditions.