King Willem-Alexander and his consort, Queen Maxima, apologized to the Dutch people today after it came to light that the family had taken a trip to Greece in the middle of the second wave of the coronavirus in Holland, when the populace is being urged to remain at home.

The Dutch royals, who had been in hot water just recently, in August, after they had traveled to Greece for a summertime jaunt, told his subjects in a video message that he had “regret in the heart” acknowledging that he shouldn’t have flown to Greece.

The trip had been meant as a family vacation last week, but it was broken off immediately after the news broke at home, angering many of his subjects.

The monarch admitted that “It hurts to have betrayed your faith in us,” while seated next to his wife Queen Maxima, at their palace outside The Hague.

The abject apology was seen as very unusual, but necessary in Holland, where under the constitution, the Prime Minister is responsible for the actions of the country’s monarch.

King Willem-Alexander and his family had jetted off to Greece, where they own a home, last Friday, October 16, but it was a short-lived holiday, with the royal couple, along with one of their daughters, returning home in ignominy just the day after.

This is the second time the Dutch royals have come under scrutiny for taking off for foreign climes, after their Greek vacation in August drew ire from their subjects back home.

At that time, King Willem-Alexander and Queen Maxima said they regretted that they had let their guard down and not followed coronavirus health protocols while on holiday on Milos Island.

In a post on social media, the royal couple apologized for neglecting the social distancing measures and not wearing masks while posing for a photograph with a restaurant employee on the Greek island.

In the picture, the King is seen holding a face mask in one hand while having the other arm around the Queen, while the unnamed man on the right also places his arm around her.

“In the spontaneity of the moment, we did not pay attention to that. Of course we should have. Because compliance with corona rules is also essential when on holiday,” the royal couple tweeted at the time of that indiscretion. 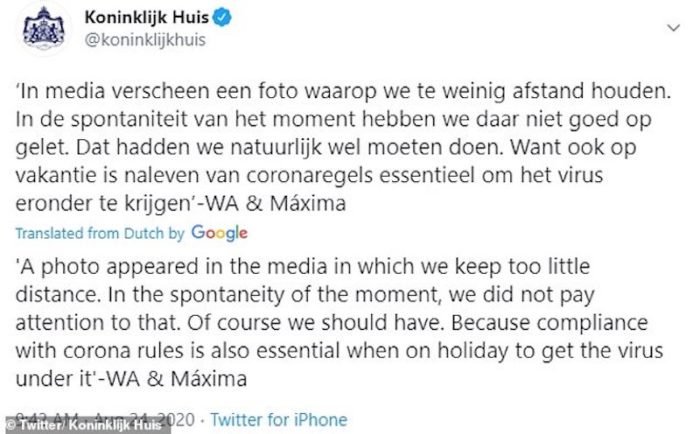 The Dutch royal couple were on a summertime visit to Milos with their daughters Princess Amalia, 16, Princess Alexia, 15, and Princess Ariane, 13.

The October vacation was undertaken just shortly after the Dutch government imposed what it called a “partial lockdown” in a renewed bid to tamp down the soaring rates of coronavirus infections in the country.

“Even though the trip was within the regulations, it was very unwise not to take into account the impact of the new restrictions on our society,” the King said in today’s video message.

“Our own decision to return was taken in the realization that we should not have gone,” the monarch added.

“We will continue to work with you to get the coronavirus under control,” he pledged, “so that everyone in our country can then resume normal life as soon as possible.”

He then added, “That is the most important thing now and we will continue to do so, to the best of our ability. We are involved. But not infallible.”