By Emma Uri
October 9, 2020
Facebook
Twitter
WhatsApp
Linkedin
Email
In response to the recent outrage over the horrendous torture of a dog in Chania, Crete, the Greek government has vowed to pass stricter disciplinary codes for animal abuse.
The Minister of Rural Development and Food Makis Voridis has stated that he will push to introduce a stricter criminal framework in order to allow for more effective prosecution and punishment of animal abusers in Greece.
“The recent extreme torture of an animal that took place on Crete highlights the need of introducing a tougher penal framework, which will make prosecution and punishment of animal torturers more effective,” Voridis stated. “In the immediate future, we will propose the adoption of such legislation to Parliament.”
This announcement comes following the alleged animal abuser turning himself in to local authorities on Thursday. He has subsequently been fined €30,000 for the abuse and been suspended from his place of employment as well while the investigation is open.
Earlier this week, a 55-year-old man tied up and mutilated his dog in his backyard, allegedly to “calm the dog down.” The cries from the dog drew the attention of a German national, who rushed the dog to a nearby clinic where it underwent immediate surgery and is now recovering. 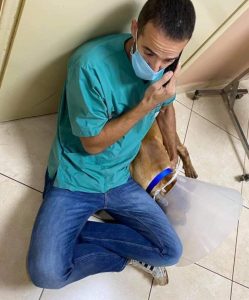 The vet Terezakis, in a statement to the Greek media, claimed that this is the first time he has witnessed a dog with such severe injuries survive.
In spite of all the suffering, the dog was never aggressive to Tezerakis nor any of its rescuers, and once fully recovered will be ready to be adopted by a loving family.