Daughters of Penelope Celebrate Decades of Service, Contribute to Society During Pandemic

The Greek-American organization Daughters of Penelope, formed in 1929 as an affiliate of the American Hellenic Educational Progressive Association, or AHEPA, is celebrating many decades of service to America and the world this year.

Founded in San Francisco, the mission of the women’s group its to promote the ancient ideals of Hellenism, education, philanthropy, civic responsibility and family and individual excellence. The organization now has 300 chapters, located in every major city in the Americas and worldwide.

The organization is the brainchild of Alexandra Apostolides, whose husband, Dr. Emanuel Apostolides, was a dedicated AHEPA member. the organization’s foundation supports the creation of better learning environments for the young, and grants scholarships on an international basis to a wide range of students.

Using its voice to make a difference in the public arena, the Daughters keeps in touch with leaders on the local, state and federal levels, as well as diplomatic leaders, on issues of interest to the Greek-American community. The DOP educates its members on these concerns through seminars and conferences with expert panelists and leaders from Washington think tanks and maintains a grassroots email list for taking action.

Elena Skardis Saviolakis is the current Executive Director of the organization, responsible for overseeing the management and operations of the Daughters of Penelope as an international organization.

Saviolakis is a graduate of The American University of Greece in Athens, Greece, with a B.S. in International Business and European Affairs; she also holds an MBA from George Washington University. She is a member of the Daughters of Penelope Hermione Chapter No. 11 in Washington, DC.

Greek Reporter asked Saviolakis how current world events have impacted the organization’s plans for this year. “For certain, the pandemic has presented a great challenge to membership-based organizations such as the Daughters of Penelope,” Saviolakis replies.

“The safety of our members is our priority. Therefore, we had to cancel events such as fundraisers and conferences. However, despite these cancellations, including the annual Supreme Convention, our members adapted and persevered, holding meetings and fundraisers virtually, via Zoom, to stay connected and to fulfill our mission. Nationally, we plan to hold our first leadership seminar for the new administrative year for our national officers on October 3, via Zoom.”

Philanthropy, she stated, is a pillar of the Daughters of Penelope mission, and that is no different this year. From natural disaster relief, to raising funds to eliminate life threatening diseases, to making significant contributions to local municipalities, the Daughters are at the forefront of charitable giving.

“In February, just prior to the shelter-in-place guidelines due to the onset of the Covid-19 pandemic, the Daughters of Penelope Headquarters proudly presented a timely $10,000 donation to Meals on Wheels America Headquarters,” she explains. “This was the third $10,000 donation in as many years to Meals on Wheels America, which is the leading organization to address senior hunger and isolation.

“Our members are always first to step up and lead, especially during this pandemic. Our chapters and districts throughout the United States, Canada, Europe, and Australia, have donated funds to food banks, held emergency food drives, purchased and/or made masks and PPE for hospitals and medical facilities, and they are making and distributing hand sanitizer to individuals in need.

Additionally, she states “Healthcare workers and essential frontline workers are certainly heroes. We have members who are serving their communities in those roles, and we have members who are providing support to those heroes or are heroes to the family and friends to who they are lending a helping hand. During these difficult times, we are truly thankful and blessed to have such a wonderful sisterhood.”

Asked how the principles of Hellenism, as specified in the DoP Mission statement, help fulfill the promise of the American Dream, Saviolakis replies “Daughters of Penelope members are proud of the contributions the ancient Greeks gifted to the Western Civilization.

“As Americans we share in many of the values put forth by them: civic responsibility, philanthropy, education, family and individual excellence, and the ideals of democracy. This is the essence of our heritage. It is no coincidence, therefore, that these are the core values that shape the mission of the Daughters of Penelope.

“Throughout the span of its history, the Daughters of Penelope has served as a vital vehicle for the progressive development and emergence of many American citizens of Greek heritage into every facet of society: government, business, education, and the arts. This fulfillment illustrates the promise of the American Dream and symbolizes the hard work ethic of our immigrant forebears who labored to achieve that dream with the principles of Hellenism rooted deep in their hearts.”

Asked if the DoP is still planning to meet next year at the AHEPA conference in Greece, she replies with relief “Yes! We are excited and proud to announce the Supreme Convention will be held in Athens, Greece in July 2021.

“Greece will be celebrating the bicentennial of its freedom and independence from the Ottoman Empire, and we will be there to join in the celebration. The AHEPA Family is going to participate in the events and we hope and pray the conditions will be favorable, if not back to normal in a post-pandemic world.

“Because our annual convention was cancelled this year, we are continuing our 90th Anniversary celebrations all the way to Athens in 2021,” Saviolakis replies. “We hope to have our final event commemorating 90 years at our convention hotel, the Grand Bretagne. From there, we will begin in earnest to plan for our next milestone—100 years of service to the community.” 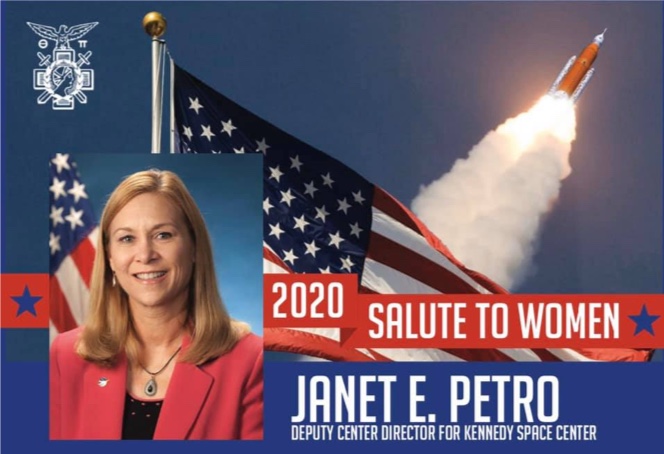 Honoring a woman who represents and possesses the goals and ideals of the Daughters of Penelope has become a biennial tradition of the DOP as part of the AHEPA Family Supreme Convention.

Greek-American Janet E. Petro was chosen as the 2020 Daughters of Penelope Salute to Women Honoree. Petro is the deputy director of NASA’s John F. Kennedy Space Center in Florida.

Appointed to the deputy director position in April 2007, she shares responsibility with the center director in managing the Kennedy team of civil service and contractor employees, determining and implementing center policy and managing and executing Kennedy missions and agency program responsibilities.

Saviolakis also shared with Greek Reporter a fascinating and hauntingly beautiful way that one of the Daughters responded to the pandemic this year. The Daughters of Penelope Phaetuse Chapter 437, in Paris, France, hosted a historic event on July 23 at the Acropolis in Athens.

The Greek singer-songwriter Monika performed ‘Saving the World,’ a song she wrote during the quarantine, as a tribute to Covid-19 heroes worldwide. The event benefited hospitals in Greece, as well, since proceeds went to the purchase of PPE.

This past Spring, during the height of the coronavirus pandemic, a member of the Komotini, Greece Chapter of the DOP, Sofia Meneselidou, also wrote a song to send encouragement to all her DOP sisters around the world. With the support of the mayor of Komotini, she gathered more than 15 musicians who videotaped each part of the song in their houses during the quarantine.

If you are interested in joining this dynamic organization, please visit www.daughtersofpenelope.org. The Daughters also have a junior auxiliary group, called the Maids of Athena. You may also contact Executive Director Saviolakis via telephone at 202.234.9741 or via email at [email protected] to get in touch with your local Chapter President for membership opportunities.

The health of Greek convicted terrorist Dimitris Koufontinas has swiftly deteriorated lately, it was made public on Saturday evening.
Greece