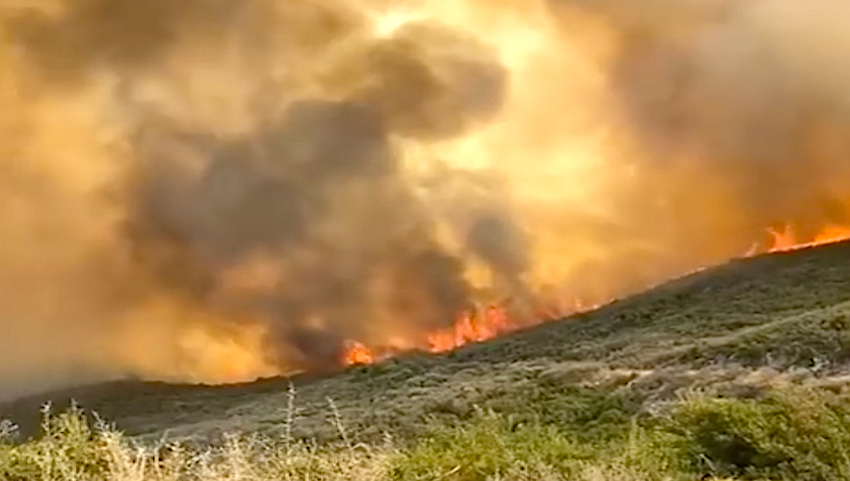 A wildfire that broke out on Saturday afternoon in the forest area of ​​Lagada in Eastern Mani is still raging, forcing the residents of five communities to evacuate as a precaution.
The fire is burning on two fronts, without threatening residential areas. The evacuation took place as a purely precautionary measure after the suggestion of the Fire Service.
Specifically, the residents of Vachos, Germa, Eleochori, Skamnaki, and Drosopigi left their homes and moved to safer areas.
According to the Fire Service, there are currently 103 firefighters operating in the area with seven groups of local volunteers, 24 fire trucks, eight firefighting helicopters, and seven aircrafts.
The effort to control the fire is done with the assistance of the local government’s use of aquifers. Fire Service Chief Stefanos Kolokouris, is also present to control the blaze.
Traffic between Areopolis and Gythio has been interrupted due to the fire and vehicles move only through backroads.

A large fire broke out on the eastern side of the historic Mani Peninsula in Greece on Saturday afternoon. The fire is still raging out of control in the area of Lagada, forcing the residents of five communities to evacuate as a precaution. Full story: https://bit.ly/3j2aMmg

On April 6, 1896, the first modern Olympics were held in Athens, Greece at the Panathenaic Stadium, featuring athletes from 14 countries.
Europe

Many of Isaac Newton's precious notebooks, in which he worked out his theories about the world, were written entirely in perfect Greek.