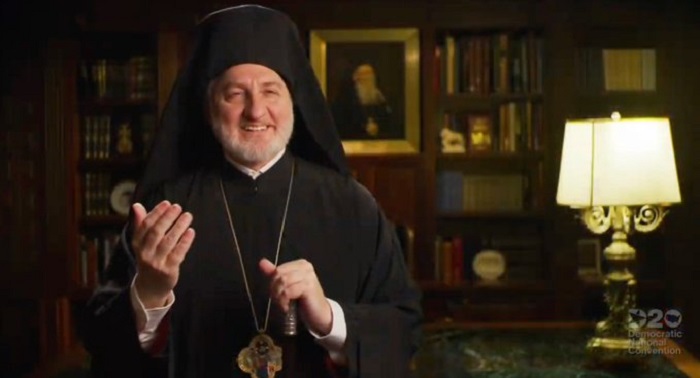 Archbishop Elpidophoros of America delivered a benediction on the third day of the Democratic National Convention on Wednesday, urging listeners to “fight against injustice, inequality and hatred.”

“We pray for the sake for our nation and its future. We pray that you will shine the light of your countenance upon the delegates of this convention and upon Vice President Joe Biden for the highest office in the land,” Elpidophoros said in a video shown to delegates.

“As we face the future as one American nation, bring us to our best selves and inspire our better angels in peace, in fairness and in generosity, that we may fight against injustice, inequality and hatred. That we may achieve a common good, a greater good, in the name of the Holy Trinity we pray, amen.”

ICYMI here is the video of the Greek Orthodox Archbishop of America @Elpidophoros delivering the benediction tonight at the Democratic National Convention. This decades-long proud tradition of our Archbishop being asked to deliver a prayer at both conventions continues. pic.twitter.com/mp6OSPMc8w

The Archbishop heads a Church of 1.5 million faithful— the largest of all Eastern Orthodox denominations in the country with over 500 parishes in almost every state.

Over the years, both Democrats and Republicans have invited Greek Orthodox hierarchs to offer prayers at their respective conventions.