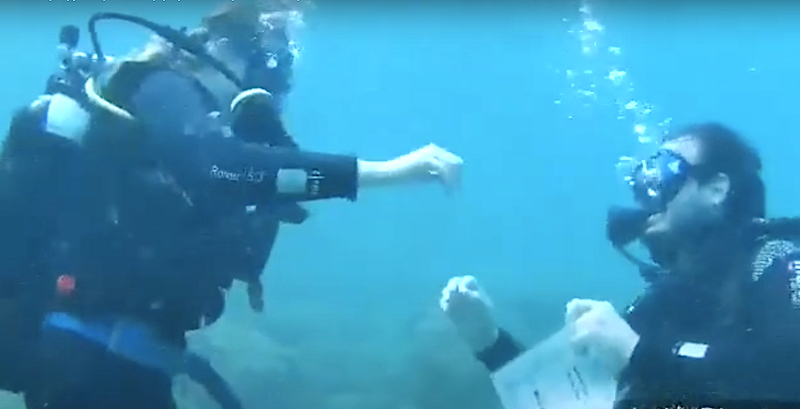 Alonissos island is considered to be an ecological paradise by many as it has the largest Natural Marine Park in Europe. As of August 3, it boasts the first Underwater Museum in Greece. Now the people who organized the Underwater Museum and the island itself can boast of its first underwater marriage proposal.
The idea of an underwater marriage proposal belongs to the President of the Municipal Council and Tourism Committee of Alonissos, Maria Agallou. She is the one who suggested it to Vangelis and Aphrodite, who in turn embraced the idea with enthusiasm.
Agallou organized the event in collaboration with the Alonissos Triton Dive Center. So the couple dove three meters (10 feet) in the water, Vangelis proposed and Aphrodite waved a sign with a big “YES” and then wore the ring.
The next step for the engaged couple would be to have the wedding underwater as well, and they might do so.
Alonissos Mayor Petros Vafinis has stated that “Alonissos has been characterized by many, and rightly so, as an ecological paradise in Greece. We as a municipal authority aspire to make it an ecological and diving paradise in Greece.”

Photographs from a rally organized in Athens in support of  Dimitris Koufontinas, a convicted terrorist who is on hunger strike were censored.
Hollywood