GRNews
GreekReporter.comDiasporaPM Mitsotakis: "The Challenge is to Make Mati Much Better Than Before"

PM Mitsotakis: "The Challenge is to Make Mati Much Better Than Before" 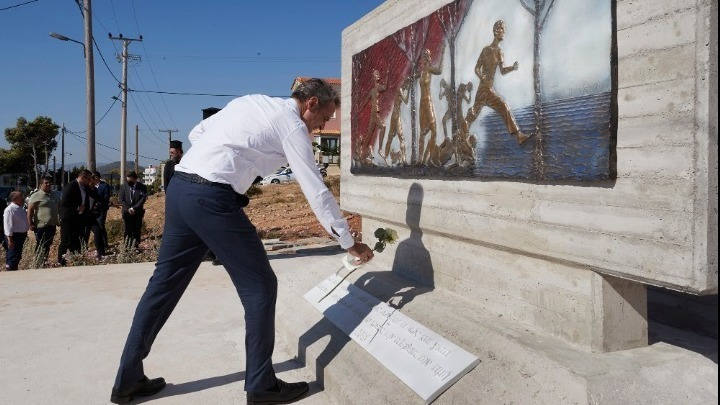 Visiting the seaside town of Mati in Attica on Thursday, two years after the devastating wildfire that gutted the verdant suburb, leaving 102 dead and many homeless, Prime Minister Kyriakos Mitsotakis said that the main challenge facing his government is to rebuild Mati to be much better than it was before.
One week after the two-year anniversary of the tragedy, the Prime Minister spoke with local residents about the work still being done to restore the town.
“This government has dealt very systematically with the issue of Mati. I am not talking only about clearing plots of land or removing asbestos, or sorting out outstanding issues concerning burn patients. Our big challenge was to make the area much better than it was before and we cannot do this unless we have a special town plan,” the Greek leader stated.
The discussion focused on two new projects that are now being initiated: the use of two pieces of land to serve the needs of the local community, one for the construction of a model social housing complex to house those left homeless by the fires and a second to create a park that will serve as a green space, fire break and memorial for the dead.
The Prime Minister visited the land allocated for the park, on the site of a former summer camp owned by NAT-EFKA.
“There will be a large and very beautiful park here, which is absolutely essential for the area,” PM Mitsotakis said, while he also addressed the Ambassador of Cyprus in Athens, Kyriakos Kenevezos, who had accompanied him on the visit, expressing his thanks to the Republic of Cyprus and its president Nicos Anastasiades for supporting the project.
“In consultation with President Anastasiades also, one of the two important initiatives that Cyprus will undertake is to create here, for the residents of this area, a park that will have the features of a memorial park. At the same time, however, it will be a model green space and fully usable by the area’s residents,” Mitsotakis added, noting that this would serve as a “great legacy.”
Afterward, the Prime Minister visited the spot where a social housing complex will be erected, on roughly four hectares of land provided for this purpose by the Church of Greece, near Marathonos Avenue.
“The Church of Greece has proven many times that it places its property, when this is needed, at the service of the common good, as it is doing now,” PM Mitsotakis said, thanking the Church for granting a portion of the property for this important project to house fire victims.
The Greek PM said the project will become a reality “so that we can provide shelter with criteria that will be strictly set so that they are absolutely fair to our fellow citizens, who have now lost their primary residence to the fire and wish to remain in the area.”
The construction will be undertaken with the support of the Republic of Cyprus, using a donation of 12 million euros made by the Cyprus government and its citizens. Eight million euros will be spent to erect the housing units, while three million euros will be used for designing and the technical works required to create the park, with the remainder covering sundry needs, such as the park’s maintenance.
While in Mati, Prime Minister Mitsotakis also visited the recently-unveiled monument for the 102 victims of the fire and placed a white rose on the inscription there.
The latest initiatives for Mati are part of a broad swath of measures taken over the last year, from the removal of dangerous flammable waste and asbestos that had been left behind to drafting a Special Town Plan, as well as support measures for burn patients and fire victims.
Public consultation on the Special Town Plan has been extended until August 17, with the aim being to have a sustainable design that will correct the mistakes of the previous layout of the road system and protect residents from natural disasters while respecting their property rights.
With information from AMNA