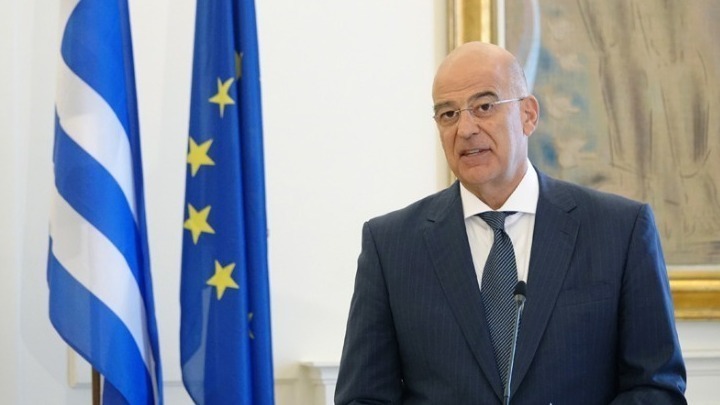 In response to yet another instance of Turkish aggression after last week’s sharply heightened tensions, Foreign Minister Nikos Dendias once again contacted his Cypriot counterpart Nicos Christodoulides on the phone on Thursday morning to discuss today’s events in the Mediterranean.
In a later interview with Antenna TV, Dendias charged that the Turkish seismic research vessel “Barbaros” is blatantly violating Cyprus’ Exclusive Economic Zone (EEZ) and he sent the message that Greece will support the Republic of Cyprus in any way requested of it, including imposing further sanctions on Turkey.
Dendias also outlined the context and content of any future prospective dialogue between Greece and Turkey, making it clear that the only difference that Athens recognizes with the neighboring country is the extent of the continental shelf in the Aegean and the Eastern Mediterranean and the overlying sea zones, or EEZs.
In his interview, Dendias said Greece has stated that it is always open to such a dialogue — though not to a discussion of a laundry list of issues — but only if Turkey meets the self-evident proviso of abstaining from all violations and provocations.
The Greek Foreign Minister also reiterated that, if the two sides were unable to agree on a mutually acceptable solution, Greece will agree to go to the international court of justice at The Hague and settle the dispute there.
“We have no other differences with Turkey. This is the context and the object of dialogue,” he clarified, clearly defining that what Greece seeks in the region is a pattern of behavior that is mandated by international law and the Law of the Sea.
“We always operate within a specific framework: the EU, international law, the 21st century. We are not a country that seeks conflicts and tensions,” Dendias stated pointedly, adding that Turkey obviously still sees itself as existing in a previous era, so that it often pursues a policy of tensions.
“We do not follow it in this,” the Greek FM said, adding that communicating in terms of international law is the only way to resolve disputes.
Dendias stated that “we have not reached a point where we can say that we have even agreed on the resumption of the dialogue, which was interrupted in 2016.”
The Foreign Minister also noted that Greece is not currently at a level of conducting exploratory talks with Turkey, but rather is now at a level of contacts that could, if successful, lead to the resumption of such talks.
With information from AMNA