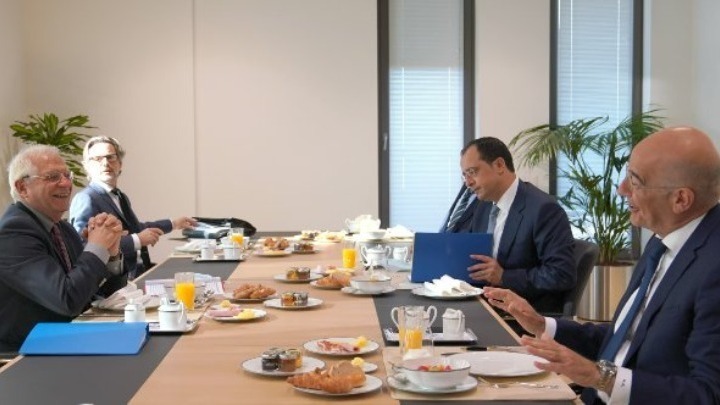 Greek Foreign Minister Nikos Dendias announced on Monday that “at the request of Greece, a broad consensus was reached to proceed with a list of further measures if Turkey continues its delinquent attitude.” The Minister made his remarks after the end of the EU Foreign Affairs Council (FAC) meeting in Brussels.

He also stated that “the escalation of Turkish delinquency and authoritarianism was at the center of our discussion and there was strong condemnation of the issue of Turkey’s conversion of Hagia Sophia into a mosque. Turkey has even been asked to reconsider and reverse its decision.”

The minister said he spoke at the FAC meeting about “the serious implications of Turkish delinquency on security and stability in the eastern Mediterranean,” and how Greece’s partners expressed solidarity with both Greece and Cyprus “against illegal Turkish actions, which are carried out to the detriment of our sovereignty and sovereign rights.”

“At our request,” Dendias noted, “there was a broad consensus on a list of appropriate further measures,” namely sanctions, that would allow the EU to respond effectively if Turkey proceeded with its delinquent behavior.

Dendias attended the FAC together with his Cypriot counterpart Nicos Christodoulides, and met with the High Representative of the European Union for Foreign Affairs and Security Policy, Josep Borrell, on the sidelines of the meeting.

Greece agreed with Borrell that he should explore ways to reduce tensions with Turkey, “but strictly on the basis of the Council’s conclusions,” Dendias emphasized.

The Minister noted that the meeting also discussed reports from a number of countries, including Greece, of the violation of the arms embargo by Turkey in Libya, and that the country was directly called upon to stop violating it, he added.