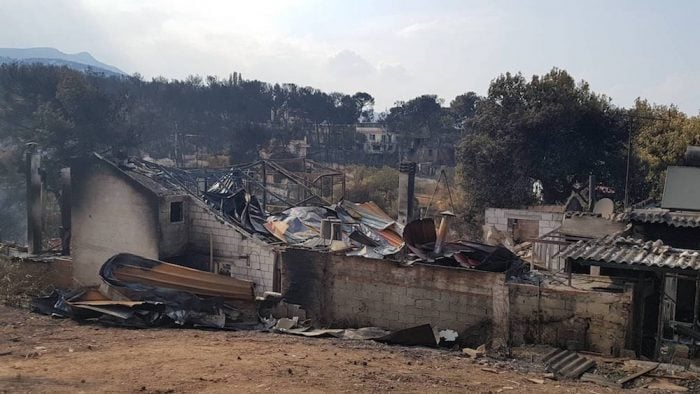 It has been two years since the devastating fires of July 23, 2018 in the seaside Athens suburb of Mati left horrifying images that the mind cannot erase. The fear and devastation of that day still continue to haunt Greeks.
As the photos and footage from that day re-emerge in the media and the posts of the victims’ relatives and friends again flood social media, a big “WHY” still hangs unanswered in the air.
The ruthless flames left 102 people dead, and some 250 injured, while approximately 2,500 houses were either burned to the ground or damaged. Almost half of the houses are now habitable, save for the eerie memories that linger there.
The horrific fires of that day have been described as the second most deadly to hit any country this century. The fire, which broke out early in the afternoon, consumed 102 men and women, children, and elderly people, as well as animals. The flames destroyed one of the most beautiful and verdant seaside spots in Attica in less than twelve hours.
The fire at Mati is the second-deadliest wildfire of the century after the 2009 bushfires in Australia which killed 173 people. It is also counted as the sixth-deadliest in the last 100 years.
Yet, the most haunting thing of all about the fire, perhaps, is that many believe that most of the lives lost could have been saved. Had the authorities acted efficiently and competently, most of the people who met a horrible death that day might be with their loved ones today.
The grief was soon replaced by anger. Anger towards the police and fire service who were slow to respond and evacuate. Anger towards the political authorities who went to the operation center late at night and pretended that there were no casualties.
But there was even more anger when the government switched the blame to the houses that had been built without a permit, blocking the escape routes. Or when no official even had the humanity to offer an apology, or express the slightest amount of grief over the catastrophe.
Strong evidence of a cover-up surface two years after the fire
Only days before the second anniversary of the devastating fire, new evidence came to light, suggesting that the leadership of the Greek Fire Service attempted a cover-up to divert responsibility.
According to audio evidence released by Greek daily newspaper Kathimerini, the leadership of the fire service at that time, claiming orders from above and instructions from political leadership, appeared to be acting in an organized manner not to shed light on the evidence but instead to cover up the mistakes they had made and protect the SYRIZA officials involved.
Kathimerini said it had turned up testimony indicating attempts to prevent the Greek Fire Service investigator appointed by the Prosecutor’s office from doing his job.
Investigator Dimitris Liotsios filed formal complaints against former Fire Service Chief Vassilis Matthaiopoulos, alleging threats and blackmail to force the truth about the chaotic response to be kept hidden and not reveal the government’s failures, the newspaper claimed.
Liotsios also submitted an audio recording of the most damning of these conversations. “If you write about your superiors having any blame, we will close ranks and tear you apart,” Matthaipoulos allegedly told him.
Using a string of profanities, Matthaiopoulos is also heard chiding Liotsios for demanding documents signed by then-Attica Regional Governor Rena Dourou. The former governor is facing a stalled prosecution for her handling of the disaster. Matthaiopoulos also accuses the investigator of lacking the expertise to assess the content of the forestry and fire service documents.
“Keep it simple, or they’ll take you for an idiot… Five little things: Wind, combustible matter, a mixture of pine trees and houses, anarchic, unplanned construction. And the result was that the fire got out of control in an hour… Five lines, five words, and hand it in. And the prosecutors? Some people will get the pie and you’ll get f…d. That’s how the game is played in Greece, Matthaiopoulos told Liotsios.
Court documents showed Liotsios ran into a brick wall of obstacles, from officials trying to prevent him from revealing the government’s failures, to fire service officials challenging his authority and rank, the newspaper said.