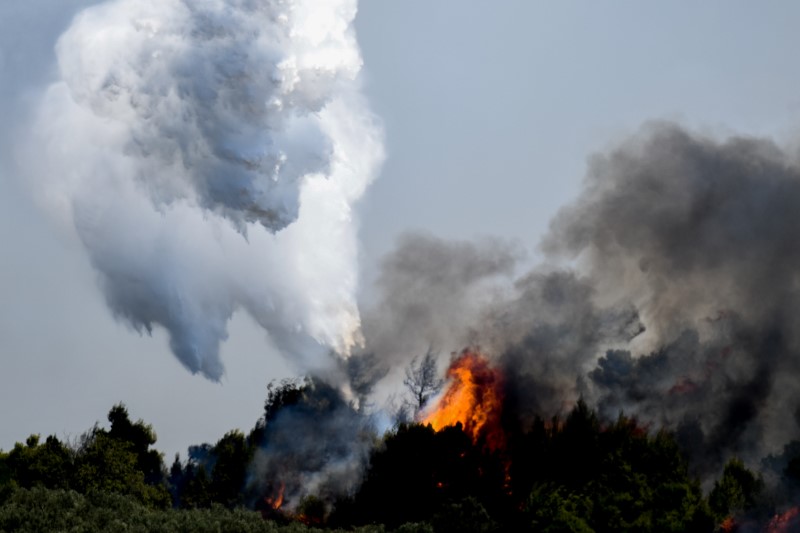 For a second day, Greek firefighters are continuing to battle the fire that broke out near Corinth, on the Peloponnesian peninsula, on Wednesday, with villagers now having been evacuated and water-dropping aircraft making repeated runs at the blaze.
Another fire blaze at the popular spa area of Loutraki, in the region of Corinth, was partially subdued later in the day.
Kehries fire ‘out of control’
The village of Drassa in the Corinthia prefecture was evacuated on Thursday as the fire that started on Wednesday at Kehries is still burning “out of control,” Corinth Mayor Vassilis Nanopoulos told the Athens-Macedonian News Agency (ANA-MPA). The fire is continuing to burn inland from that area.

A summer camp at Sofiko was also evacuated, he said. In all, a total of seven villages have now been evacuated but there have been no injuries reported thus far. Agricultural land as well as pine and olive groves have been burned. Reports say that at this point, ten homes have been seriously damaged or destroyed in the fire.

Nanopoulos requested that the government and the Peloponnese Regional authority declare the municipality in a state of emergency, he said, as the fire cannot be contained despite the participation of all regional fire brigade forces.
More than 270 firefighters, with 61 fire engines and 15 ground-based teams with 61 vehicles, 6 helicopters, one of which is from the army, as well as three aircraft — and a group of hikers as well — have been battling the blaze, but high winds are creating multiple, scattered fires, the authorities said.
Most of the evacuated villagers and those who live in retirement homes in the area have now been bused to nearby beaches, according to reports. There were several other wildfires that had broken out across the country in recent days but firefighters who had been battling those blazes were transferred to the Corinth fire as those previous fires had been extinguished.


Korinthostv. is reporting that the Corinth mayor ordered the evacuation of Drassa and the camp called “The Ranch” in Sofiko, Corinth. Children who have been evacuated will be taken to the Aristotle School in Corinth.
Mayor Vassilis Nanopoulos also requested that the Municipality of Corinth be declared a state of emergency.

🔥A large #wildfire broke out in #Greece 🇬🇷close to Kechries and #Corinth. Villages and settlements had to be evacuated as a precaution.

These #Sentinel2 🛰️🇪🇺images from 22 July 2020 show the extent of the fire and a large plume of smoke. #Πυρκαγιά #Κεχριές pic.twitter.com/SAdFPGt7Ol

“I want to inform the citizens of the Municipality of Corinth that the fire that has broken out since yesterday in our municipality is uncontrollable in many places and that is why it was decided to evacuate the settlement of Drassa and the Ranch SKOURAS camp at noon,” the mayor’s announcement stated.
“I formally asked the government and the region to declare the Municipality of Corinth a state of emergency, since all the criteria are now met. I urge citizens to be especially careful in the coming hours, especially in areas where there is a fire,” he added.
With information from AMNA