Large Wildfire in the Peloponnese Forces Evacuation of Villages 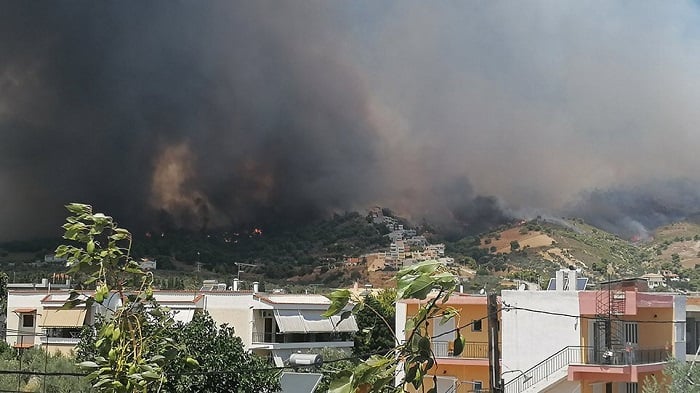 At least three villages were evacuated on Wednesday near the village of Kechries in the municipality of Corinth as a large wildfire has approached houses.
Authorities are also concerned because the fire is raging close to a military depot in the area.
Dozens of firefighters, aided by helicopters, are battling the fire, which unfortunately is being aided by strong winds. According to the fire brigade, there were 77 fire men and 26 fire engines fighting the fire on Wednesday afternoon, assisted by four teams of fire fighters on the ground and special fire fighting operations motor unit. Two fire-fighting airplanes and five helicopters were operating from the air.
The firefighters will soon receive reinforcements, while Deputy Civil Protection Minister Nikos Hardalias and Fire Brigade Chief Lieutenant General Stefanos Kolokouris are making their way to the area.
Earlier, Corinth Mayor Vassilis Nanopoulos told the Athens-Macedonian News Agency (ANA) that authorities had evacuated three villages – Agios Konstantinos, Galataki and Zimens – and a children’s summer camp that was near the fire’s path.
The residents were taken to a safe location near a coastal zone in coaches or in their own vehicles. Nanopoulos said the fire had not threatened the summer camp, while firefighters were striving to keep the flames away from houses that were nearer the fire line.