By Tasos Kokkinidis
July 14, 2020
Facebook
Twitter
WhatsApp
Linkedin
Email
Born in Northern Ireland, Hellenist author, journalist and lecturer Bruce Clark has a long association and a deep understanding of Greece from ancient times to modern.
As a journalist for Reuters, the Times, the Financial Times and the Economist he traveled numerous times to Greece. His command of modern Greek enables him to delve deeply into the politics, society, culture and history of the country.
“I can see an inner self-confidence which can have good and bad results,” he says of the Greeks. “There is an impressive ability to recover from disaster, but also a temptation to court disaster by flying too near the sun,” he tells Greek Reporter as he works on his latest ambitious project: A book on the history of Athens from ancient times to today. 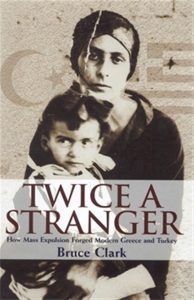 Clark’s previous book “Twice a Stranger: How Mass Expulsion Forged Modern Greece and Turkey”, published in the UK in 2005 became a reference point in the historic debate.
It provided a fascinating account of the turbulent events in the beginning of the 20th century by drawing on new archival research in Greece and Turkey, and interviews with some of the surviving refugees, allowing them to speak for themselves for the first time.
Speaking to Greek Reporter, Clark described how his Hellenism was formulated from an early age and how a visit to the sacred Aegean island of Delos transformed him. “For me that childhood trip was a starting-point in my journey as an ancient and modern Hellenist,” he says.
Clark recently gave a lecture on Greece, Britain and the arts at the invitation of the British Embassy in Athens. The lecture can be seen here.
Following are excerpts of the interview with Clark:
You have a personal link with an American founder who was also a Hellenist, tell us about it…?
Charles Thomson has inspired me. He was one of the finest figures among the American Founders. He defended the rights of the indigenous and saw the evils of slavery. He spent his earliest years on the small Irish farm where I also grew up, and then arrived in America as a ten-year-old orphan. He was a quick learner of Greek and Latin and that helped him to join the elite circles of Philadelphia. After 15 years as secretary of Congress, he became the first person to translate the Greek version of the Old Testament into English. He had a serious-minded belief in the value of learning, science and philosophy, a feeling that the diligent study of books would open doors. And he took the ideal of liberty very seriously.
Your childhood visits to Greece were also a big influence, weren’t they?
In spring 2019, I went to Delos to report for the Economist about an installation of modern sculptures. I had a kind of transcendental experience which transported me back almost 50 years, to the only other time I had been to that sacred island. When I was 13, my parents took me and my 11-year-old brother, plus another couple, on a Greek sailing trip in an old wooden boat, and the high point was exploring Delos. When I returned last year, I had the sense that all six of us had been transformed by that early visit, but each of us in a different way. For me that childhood trip was a starting-point in my journey as an ancient and modern Hellenist.
How has your work as a writer and journalist shaped your view of Greece?
The Greek phases in my career have been at wide intervals. I came to Athens to work for Reuters as a young reporter in 1982-86. In the late 1990s the Financial Times sent me back for several short trips. Then in 2002 I spent five weeks writing a survey of Greece for Economist. More recently, a different project has taken me back to Greece. I have signed a contract to write a long history of Athens, which should be finished this year. In both ancient and modern Athens, I can see an inner self-confidence which can have good and bad results. There is an impressive ability to recover from disaster, but also a temptation to court disaster by flying too near the sun. Whether in 404 BC or 1922, there was always an amazing ability bounce back from catastrophe. But the very feeling that you can, if necessary, bounce back was often an incentive to take reckless risks. That inscription at Delphi, “mhdenagan,” (“nothing to excess”) was an important reminder: it was there for a reason..
In describing the cultural interactions between Greece and the Anglophones, what forms of interchange stand out?
In the cultural relationship between Greece and the Anglophone world, I can see at least four distinct phases. Britons and Greeks interacted in the multicultural world of Cairo and Alexandria, whether as soldiers, cotton merchants, educators or budding writers: Cavafy became world-famous through his friendship with the British novelist, EM Forster. Then, soon after the Second World War, Britain surrendered its role as the dominant power in Greece to the United States, but tried to retain a strong cultural influence through the British Council, which brought famous writers and scholars to Athens. Another strand was the interest of British scholars (sociologists and art historians as well as theologians) in Greek Orthodoxy. Then, from the Second World War onwards, and especially during the 1967-74 dictatorship, there has been a network of Britons and Greeks who were committed to the political left. To a surprising extent, these apparently different worlds were intertwined.
The Anglophone world is more than Britain, of course?
A very different but somewhat overlapping story can be told about cultural and literary relations between Greece and Ireland. Seamus Heaney, the Irish Nobel laureate, had a deep fascination with Greek mythology and drama, and developed an interest in modern Greek poets, including Seferis, after a visit to Greece that coincided with his Nobel Prize announcement.
Then there is Louis MacNeice, who is considered both a major British poet and a major Irish poet. He had a British education and worked for the British Council, spending 1950-51 in Athens, but he was deeply influenced by the landscape of Ireland where he had grown up. In a sense he was stateless. The same could be said of Kevin Andrews, who had American parents, a British education and an Irish name but only found a homeland in Greece, which he described in some brilliant books — and was rewarded with a Greek passport.