Athens Area Poised to Get First Skyscrapers at Hellinikon

By Philip Chrysopoulos
July 6, 2020
Facebook
Twitter
WhatsApp
Linkedin
Email
After breaking ground Friday, signaling the beginning of work for the Hellinikon Project – the largest development and investment project in Greek history – the construction of the very first skyscrapers in Athens is set to begin.
The project, on the site of Athens’ former international airport, undertaken by Lamda Development, will turn the 620-hectare (1,500-acre) piece of real estate into a complex of public parks, luxury residences, hotels, sporting facilities, exclusive shops, a yachting marina and a casino.
The total cost of the gargantuan project is slated to be approximately 8 billion euros ($8.9 billion).
The Hellenic Gaming Commission has awarded the casino operating license at Hellinikon to the Mohegan Gaming and Entertainment – GEK Terna SA consortium. Once the company is given final approval, construction of the integrated resort casino will commence.
The construction of the skyscraper resort-casino and the other skyscrapers — six in total — has generated reactions from the opposition and citizen groups, since the tall buildings will change the Greek capital’s skyline forever. The issue was even taken before the Council of State, Greece’s highest administrative court.
The Council of State granted permission for the building of six skyscrapers up to 200 meters ( 656 feet) tall. The project will include a residential building in the marina area, another residential tower along the promenade road, an office building, a hotel, and the casino with an integrated resort tower.
The Mohegan Gaming and Entertainment – GEK Terna SA consortium presented the design of the resort-casino building complex, created by the international architectural firm Steelman Partners, which specializes in the design and construction of IRC complexes. 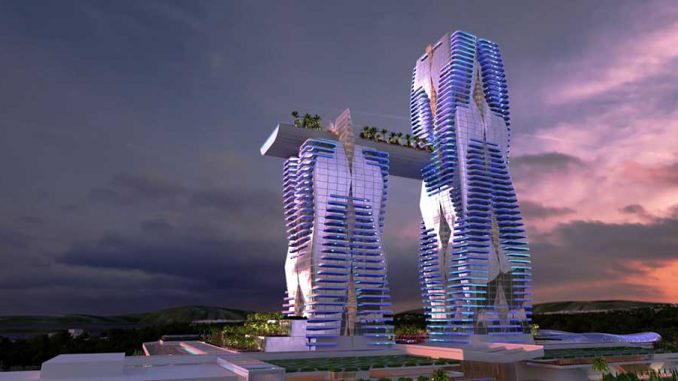 The inspiration for the architectural design comes from the architectural past of Greece, and in particular from Athenian statues and buildings, mainly the Parthenon and the Caryatids on the Erechtheion building (photo).
Minister of Development and Investment Adonis Georgiadis stated that the buildings will be ready in 3.5 years and the complete project will bring 80,000 much-needed jobs to the area.
A question that arises from the construction of the project is whether the wider Athens area should even have such tall buildings in the first place. There is the argument that since Acropolis Hill is 150 meters tall, there should not be any structures higher than that in the vicinity.
Currently, there are 25 tall buildings in Athens, ranging from 33 to 103 meters in height. But there is only one true skyscraper, the Athens Tower, standing 103 meters (338 feet) tall in Ampelokipi, and constructed in 1968. None of the many apartment blocks in the capital  exceed 27 meters (88 feet) in height.
There is also the argument that skyscrapers simply do not belong in Athens because of its ancient past. Others argue that the beautiful seaside landscape of the Hellinikon area should remain as natural and untouched as possible.
“The unsubstantiated construction that calls itself “Caryatids” is mocking in its inappropriate form the immortal statues of the Erechtheion with not only its 100 times higher height but also its own reinterpretation of their historical meaning,” charged the Hellenic Architectural Society after the design of the casino resort was made public.
Τhis prestigious Society, which opposes the construction of the skyscrapers because their height exceeds that of the Parthenon, pledged that it will not remain silent and will further try to raise public awareness on the issue.
“The Hellenic Architectural Society (founded in 1946) expresses its deep regret for these developments affecting the last “treasure” of the Attica land that has incalculable material, urban, historical and symbolic value and the leading monument in the history of Western civilization,” it said in a statement.

The casino tower design has been mocked in social media, while leftist parties accuse the government of bowing down to private interests and disregarding the environmental and cultural damage the project will cause.
The New Democracy government which came to power on July 7, 2019 accused the previous leftist administration and former prime minister Alexis Tsipras of stalling the overall project because of their political beliefs.
Several SYRIZA party members objected to the Hellinikon project, arguing that the former airport’s land should become a metropolitan park. Nevertheless, the SYRIZA government had renegotiated with Lamda Development and gave permission for the project to be created in 2016.
However, several obstacles had appeared in the Ellinikon’s development in the form of archaeological studies, objections from the Forestry Department and citizen group appeals to the Council of State.
Finally, as of last week, bulldozers began demolishing buildings inside the Hellinikon area and the most ambitious development and investment project Greece has ever seen is now in full gear and is going full speed ahead.