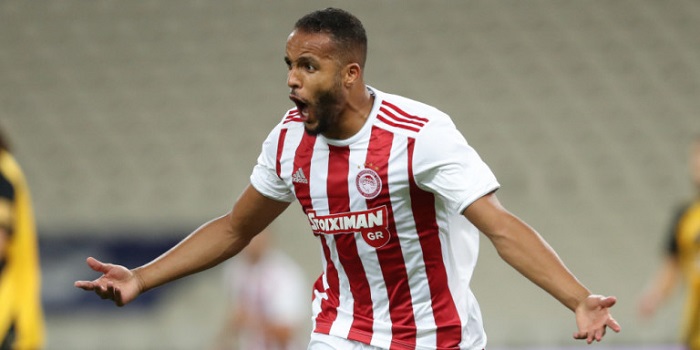 Olympiacos clinched their 45th championship title in Greek football after an impressive performance beating an under-strength AEK side 2-1 on Sunday night.
AEK and Olympiakos, who will meet again next month at the Greek Cup Final, played an entertaining match at the Olympic Stadium of Athens, each enjoying superiority for about 45 minutes.
Youssef El Arabi opened the scoring with a superb, acrobatic volley on 38 minutes, and Mady Camara made it 2-0 with a slick first-time finish from Kostas Fortounis’ assist.
AEK did step up their efforts in the second half and pulled a goal back through Sergio Araujo from close range, before laying siege to the visitors’ goal in the closing stages but without getting an equalizer.


PAOK opened a three-point lead over AEK with a vital 2-0 win over city rivals Aris in an entertaining Super League Thessaloniki derby at the Kleanthis Vikelidis Stadium.
Defender Fernando Varela headed PAOK in front on the half-hour mark, after Karol Swiderski had missed a first-minute penalty. Swiderski made amends on the stroke of half-time by making it 2-0 with a slick finish from a Diego Biseswar pass.

Olympiakos is on 78 points, PAOK has 59 and AEK is on 56. In the other match for the playoffs OFI and Panathinaikos played out a goalless draw on Saturday.