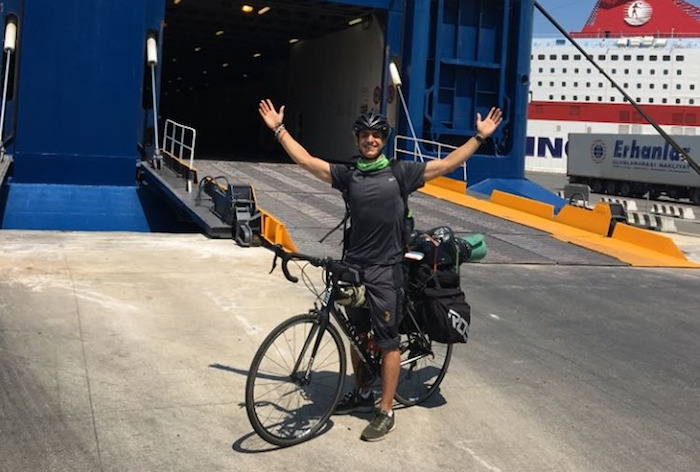 A homesick young Greek, studying at Aberdeen University in Scotland, had enough waiting for the lifting of travel restrictions and decided to cycle his way to his hometown, Athens.
Twenty-year-old Cleon Papadimitriou managed to cover 3,500 kilometers from the one edge of Europe to the other, carrying a load of 30 kilograms, in 48 days.
During the pandemic he was in self-isolation at Aberdeen. With travel restrictions in place and airports closed, he decided enough is enough.
With youthful enthusiasm and courage he devised a different way to get to Greece and his family. “It started as a joke, but because I like ‘adventures’ of this kind, I started to study if that was possible,” the young Athenian told Athens Macedonia News Agency (AMNA).
The young student’s journey finally began on May 10, 2020 and crossing the United Kingdom, the Netherlands, Germany and Austria he arrived in Italy.
He boarded a boat to Patras and from there continued to Athens, where his family and friends welcomed him to his neighborhood at Melissia, north of the Greek capital, with a large banner proclaiming: “Welcome Home Cleon: One more challenge accomplished!”


Papadimitriou said that throughout his cycling Odyssey he had the support of his family. He encountered hail and snow, but also intense heat as he was crossing Europe. But it was not just the weather changes that created problems.
“Sometimes the bicycle tire burst two or three times a day, and that not only cost me a lot of time but it wasn’t good for my morale either. It was a lesson I had to learn to manage,” said Papadimitriou.
Now back in Athens he looks forward to a well-deserved rest and a holiday before he returns to Aberdeen to continue his studies.