GRNews
GreekReporter.comGreek NewsArchbishop Elpidophoros on George Zapantis Killing: "No One Deserves to Die Like...

Archbishop Elpidophoros on George Zapantis Killing: “No One Deserves to Die Like This” 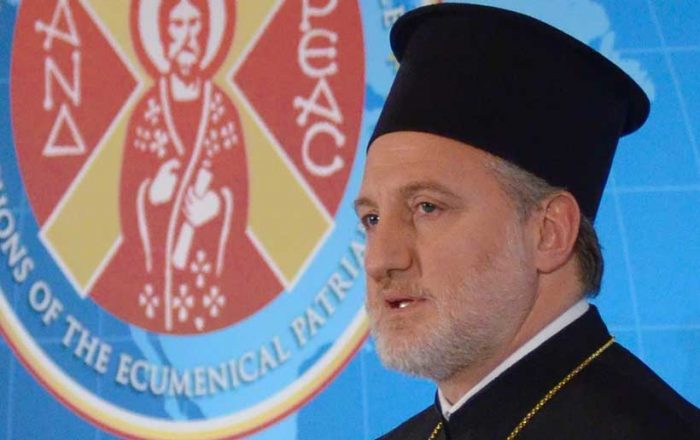 Archbishop Elpidophoros of America visited on Thursday the distraught family of George Zapantis, the Greek American who suffered a fatal heart attack after being tasered at least twice by officers in New York last Sunday.

Elpidophoros had a long meeting with his mother Aspasia Zapanti and expressed his sorrow for the event which is currently investigated by the police force.

“No one deserves such a death. No one, not even the worst criminal, should die like that. We all have our rights. There is a limit and this limit has been exceeded and is constantly being repeated,” the head of the Greek Orthodox Church in America said speaking to Real.gr.

“George’s loss could perhaps help us understand that we all need to raise our voices and be there when needed… If we do not react to the injustice done to our neighbors, whoever they may be, the injustice will knock on our door,” he added.

In his statements to Real.gr, Elpidophoros said that the Archdiocese of America will stand by the Zapantis family to help clarify the case and bring justice for killing of the 29-year-old in the hands of the police.

George Zapantis lived with his mother while caring for his sister Eleftheria, who suffers from Down Syndrome.

Police say he threatened them with a samurai sword inside his home. Officers from New York City’s 109th Precinct responded to the home of George Zapantis in Whitestone on Sunday night after receiving a 911 call for a man possessing a gun, according to police.

Zapantis, 29, who was dressed in full gladiator regalia, was in his basement when police say they spotted him holding the sword. Zapantis allegedly advanced toward the officers with the sword in hand, refusing orders to drop it, at which point police say they Tased him.

Videos taken by a neighbor show four officers attempting to handcuff Zapantis at the entrance to the home, where they Tased him again. In that video, he does not appear to be armed. Zapantis went into cardiac arrest and was rushed to New York-Presbyterian Queens Hospital, where he was pronounced dead.

A GoFundMe page under the “George Zapantis Memorial” has been started by the victim’s cousin Marina Zapantis, who wrote on the site saying that “George and his heart of gold will be sorely missed. He is survived by his mother and sister who loved him very much.”

The money which is being raised will be used to help pay off funeral, burial, and any other expenses related to Zapantis’ death in order to help his family.