He was Screaming “I Can’t Breathe,” Says Mother of Greek American Dying from Police Taser 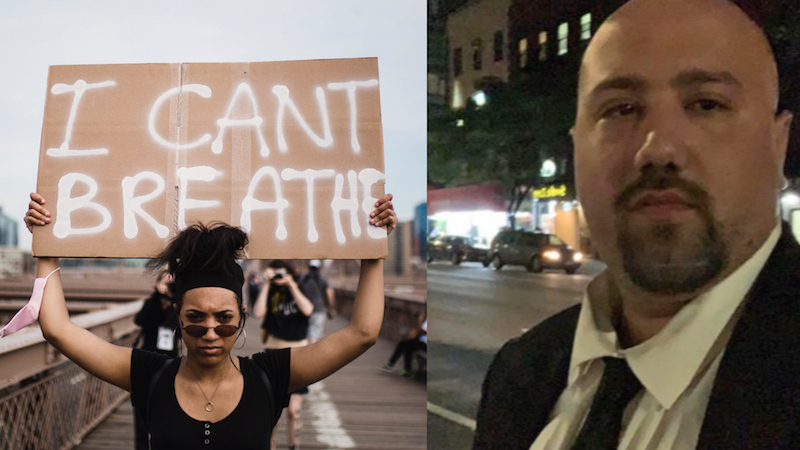 The mother of George Zapantis, the Greek American who suffered a fatal heart attack after being tasered at least twice by officers in New York on Sunday, revealed on Thursday that her son was screaming “I can’t breathe”.

Speaking on Mega TV, Athanasia Zapanti said that her son was actually tasered three times. “My son was shouting ‘I can’t breathe’. He did not resist arrest, he had his hands behind his back. They should not have killed my son.”

George Zapantis lived with his mother, while caring for his sister Eleftheria, who suffers from Down Syndrome.

Police say he threatened them with a samurai sword inside his home. Officers from New York City’s 109th Precinct responded to the home of George Zapantis in Whitestone on Sunday night after receiving a 911 call for a man possessing a gun, according to police.

Zapantis, 29, who was dressed in full gladiator regalia, was in his basement when police say they spotted him holding the sword. Zapantis allegedly advanced toward the officers with the sword in hand, refusing orders to drop it, at which point police say they Tased him.

Videos taken by a neighbor show four officers attempting to handcuff Zapantis at the entrance to the home, where they Tased him again. In that video, he does not appear to be armed. Zapantis went into cardiac arrest and was rushed to New York-Presbyterian Queens Hospital, where he was pronounced dead.

Zapantis’s upstairs neighbors tell the Daily News he was not threatening anyone with the sword, but was playing with it while dressed as a gladiator in the basement when police burst in.

“We want to view the body cam footage and any potential videos or witness statements they may have in order to confirm their accusation that Mr. Zapantis was armed and that their use of the Taser…was justified,” said Vomvolakis, who added that he has seen three videos of the incident showing Zapantis with no sword in his hand when he was taken down by police and zapped at least twice.

“The video we have shows that his back was turned to them, his hands were behind his back and there were four or five officers screaming at him and tasing at him, and yelling at him to not resist,” said Vomvolakis.

The Greek-American community of Whitestone, NY remains in shock and the family is demanding answers from police.

A GoFundMe page under the “George Zapantis Memorial” has been started by the victim’s cousin Marina Zapantis, who wrote on the site saying that “George and his heart of gold will be sorely missed. He is survived by his mother and sister who loved him very much.”

The money which is being raised will be used to help pay off funeral, burial and any other expenses related to Zapantis’ death in order to help his family.

Currently, the donations have reached a total of over $50,000. Marina Zapantis specified that any remaining funds will be properly distributed to the rest of the victim’s immediate family.

Marina also wrote on the page how thankful her family is for the overwhelming support given to them by the local Greek community, stating that they were “astonished by everyone’s love and generosity for our Georgie!”

The American Hellenic Educational Progressive Association (AHEPA) has released a statement requesting full transparency from the investigation of Zapantis’ death.

“As details and eyewitness accounts emerge about the tragic death of George Zapantis, of Whitestone, N.Y., we welcome reports that the NYPD’s Force Investigation Division has opened an investigation into the circumstances leading to the incident,” the statement says. It adds:

“We echo the call of the family’s attorney in requesting full transparency from the investigation. If proper guidelines were not followed, we call for those officers responsible for Zapantis’ death to be held accountable. Zapantis’s death is tragic, and we believe, could have been prevented.”