GRNews
GreekReporter.comGreek NewsArchaeologyGreece Sets an Example By Opening Up Its Underwater Cultural Heritage

Greece Sets an Example By Opening Up Its Underwater Cultural Heritage 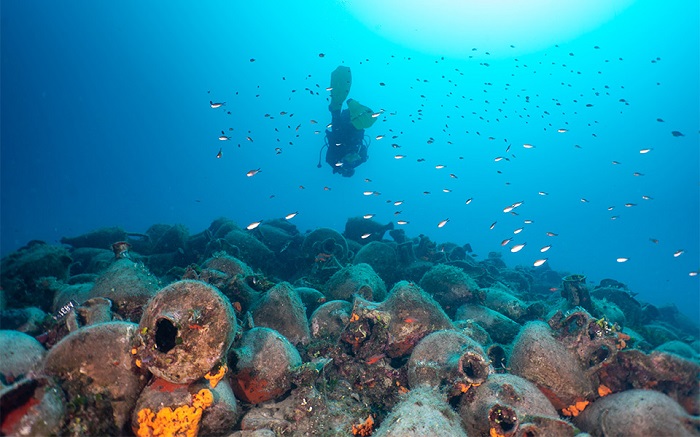 By Kaitlyn Waters*
As the dawn of the UN’s Decade of Ocean Science, to be celebrated from 2021-2030, approaches, a recent policy change by the Greek government to allow recreational SCUBA diving in all areas is set to impact both local and international communities alike.
The bill, 4688/2020, passed on May 24th of this year, now allows increased accessibility for divers to visit sites of underwater cultural heritage which were previously limited to mostly scientific dives. All dives must be undertaken, however, with the permission of dive centers.
The legislation, however, still requires that divers go through a dive center to take part in their underwater adventures. This is done in order to prevent any unsafe or potentially damaging diving to occur, especially concerning the archaeological significance of many dive sites in Greece.
More specifically, it is “to prevent any kind of a free for all,” as stated by Dr. Kimon Papadimitriou, a member of the laboratory training staff at the School of Rural and Surveying Engineering, Faculty of Engineering, Aristotle University of Thessaloniki. He also operates the Skopelos Dive Center in the Northern Sporades islands.
In the midst of a global economic upheaval due to the pandemic, the passing of this law has positioned Greece as a promising example to the rest of the world, and many hope that it may both enrich its “blue economy” sector while simultaneously meeting the sustainability goals addressed by the UN’s Decade of Ocean Science 2021-2030.
It may be difficult for us today to imagine, but there used to be a time, immediately after WWII, in which it was common practice for European governments to encourage citizens to “clear” maritime wreckage from their country’s ports in exchange for allowing the divers to keep what they had removed.
This practice was officially ended in 1952, but the legacy of treating sites of Underwater Cultural Heritage as something to be preserved — rather than erased — is a fairly modern one.
The UN’s Decade of Ocean Science 2021-2030 is centered around the promotion of the idea encapsulated in the phrase “The science we need for the ocean we want.”
By allowing for less restricted access to Underwater Cultural Heritage sites for the global diving community, more people will now be able to see Greece’s marine cultural heritage in-situ as it lies before their own eyes, rather than behind the doors of a museum.
*Kaitlyn Waters is a Public Relations representative for ScienceDIVER and a member of the Underwater Surveying Team.