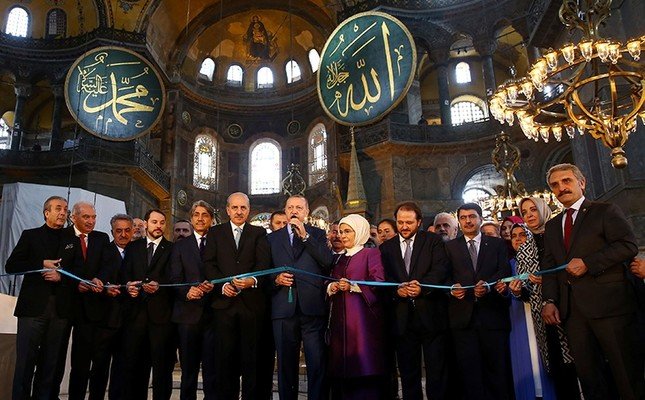 The controversial issue of once again performing Islamic prayers inside Hagia Sophia this July was discussed during a recent High Advisory Board meeting of the Turkish presidency.

President Recep Tayyip Erdoğan spoke out at the meeting, which took place on June 16, in favor of performing a prayer at the site following the Council of State’s upcoming decision, which was slated to be made on July 2.

The Council of State, which has recently postponed their decision, is currently examining the request for annulment of a 1934 cabinet decree which turned Hagia Sophia, once Christendom’s largest cathedral, from a mosque into a secular museum.

The court is expected to announce its decision on the status of Hagia Sophia in early July as to whether or not the site should be converted into a mosque once again.

Attendees of the High Advisory Board meeting also proposed that the prayer could be performed on July 15, which marks the anniversary of 2016’s attempted coup d’état against Erdoğan and the Turkish government.

Erdoğan further added to this sentiment by saying that his government will take any necessary actions concerning the opening of Hagia Sophia in line with the court’s ruling.

Construction of Hagia Sophia was undertaken in the year 537 during the glory days of the Byzantine Empire under Emperor Justinian I, with the massive building being completed in just five years.

The site was turned into a museum in 1935 after the collapse of the Ottoman Empire, and the edifice, once the seat of Eastern Christianity, has served as a secular museum ever since.

Currently a UNESCO World Heritage Site, it is still unclear whether or not Hagia Sophia will be reestablished as a mosque permanently under Erdoğan.

Many critics have cited the initiative as a desperate attempt for President Erdogan to regain his lost popularity.

A tiny islet off the coast of Attica near the Kaki Thalassa area has such a shape that it gives the impression it features a swimming pool.
Europe