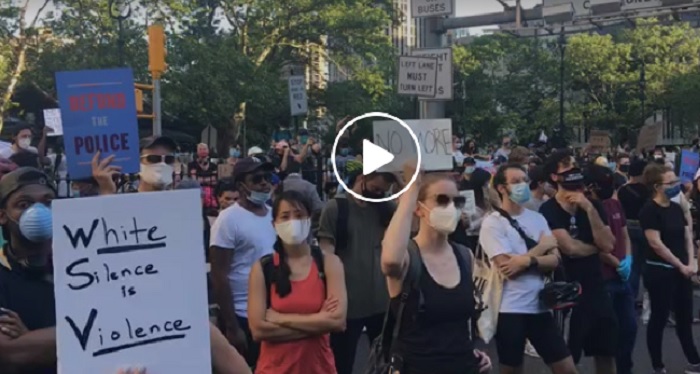 As the funeral of George Floyd, whose death in police custody spawned global outrage, was taking place in Houston Texas, relatives of victims of police brutality gathered in New York demanding justice.

Floyd died in Minneapolis last month after a white police officer arrested him and pressed his knee onto his neck for nearly nine minutes, his final moments filmed on the phones of passersby.

As many as fifteen families which had lost loved ones to police brutality attended the New York City Hall rally, including the mother of Ramarley Graham, who was shot and killed by the police in the Bronx on February 2, 2012.

She told Greek Reporter that her 18-year old son was killed in front of his 6-year-old brother and his grandmother, but the police officer who shot him “never spent a day in jail.”

Other relatives included Eric Garner’s mother. Her son was killed in 2014 when an NYPD officer put him in a chokehold while arresting him.

Also on hand, as the crowd was shouting “No Justice, No Peace!” was the father of Sean Bell, the young man killed in a hail of police bullets in 2006.

The fight for police reform is all too familiar for Sharonne Salaam, whose son, Yuseff Salaam, was one of the falsely accused “Central Park Five.”

“We don’t want to be terrorized by the people who are supposed to be there to protect us,” Sharonne Salaam said.

Relatives of Victims Killed By Police Speak Out in NYC Protest

Relatives of victims killed by police protest in New York City as George Floyd, the African-American whose death in police custody triggered a social justice movement in the US, is laid to his final rest. Anastasios Papapostolou reports live from the scene outside the New York City Hall.

Earlier, thousands of people had made their way over the Brooklyn Bridge in the march. The massive demonstration started at 3 p.m. at a rally outside Brooklyn’s Borough Hall.

Crowds descended on a church in Houston, Texas, after Floyd’s body was returned to his childhood hometown to be laid to rest in a cemetery in suburban Pearland next to his mother, whom he called out for as he lay gasping for air and dying in May.

“Why must this system be corrupt and broken?” she asked. “Laws were already put in place for the African-American system to fail. And these laws need to be changed. No more hate crimes, please! Someone said ‘Make America Great Again’, but when has America ever been great?”

Republican President Donald Trump’s Democratic opponent in the November presidential election, Joe Biden, addressed the service in a video message, saying “When there is justice for George Floyd, we will truly be on our way to racial justice in America.”

The four police officers involved, including the three who watched the entire incident, have been jailed and charged in his death.