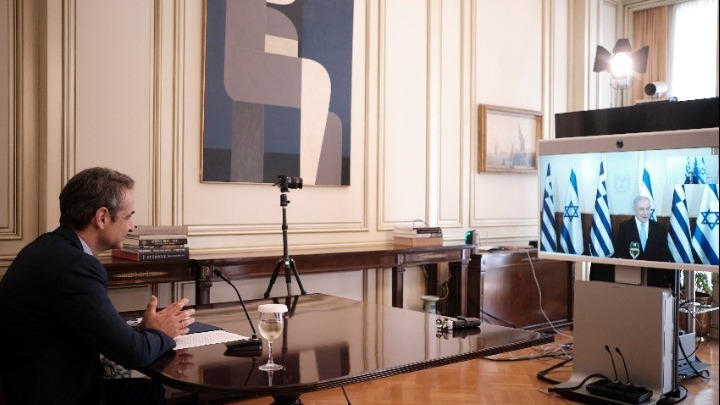 Prime Minister Kyriakos Mitsotakis and Israeli Prime Minister Benjamin Netanyahu celebrated 30 years of diplomatic ties between the countries in a Thursday video call.
The two leaders referred to the expansion of their strategic relationship in the realms of tourism, security and defense, innovation, energy, trade and culture.
Regarding the tourism sector, Mitsotakis stressed that he expects an increase in the number of visitors from Israel, in view of the start of the tourist season in Greece on June 15.

As Greece and Israel celebrate 30 years of full diplomatic relations, PM @netanyahu and I reaffirmed the strategic partnership between our two countries. Our relationship is going from strength to strength, expanding further in areas such as energy, defense, tourism & technology. pic.twitter.com/ZcpoumObkd

Netanyahu told his Greek counterpart that Israelis are keen to come to Greece as soon as it is allowed.
Netanyahu emphasized that Israel is working on opening up tourist exchanges with Greece. “There is enormous demand from the citizens of Israel. We see people on talk shows saying ‘when are we off to Greece?’” Netanyahu said.
“We really want to resume flights and tourism connections with countries in a similar situation, and the most evident one is Greece and we are working on it now.
“I hope we can bring it to completion quickly,” the Israeli PM added.

In a joint statement, the presidents of Greece and Israel confirmed the continuity of friendship and business association of the two countries.
Greece’s Katerina Sakellaropoulou and Israel’s Reuven Rivlin said they jointly celebrate “the past, present and future of our bilateral relations” and noted the particular sectors of collaboration between the two countries – economy, energy, tourism, defense, technology and culture, among others.
They also made particular mention of Greece and Israel’s tripartite collaboration with the Cyprus Republic, and the more active participation of the United States, in jointly promoting regional security, stability and growth.