Gene Rossides, a Proud Ambassador of Hellenism in America, Dies at 92 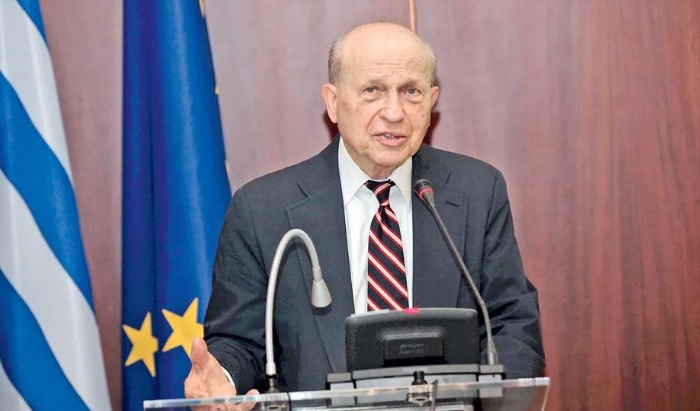 Eugene (Gene) Rossides, a proud American who never lost sight of his ancestry and became a leading voice in the Greek-American community, died on Monday. He was 92.

Rossides championed and inspired a generation and more to advocate for the rule of law, for Hellenism, and justice for Cyprus. He provided a lifetime of service and dedication to America, Greece, Cyprus, and Hellenic ideals.

He also became a sport legend in the US. He quarterbacked the Lions from 1945-48, during what is described as the “golden era” of Columbia football. At the time, he and fullback Lou Kusserow were known as the “Goal Dust Twins,” and in 1945, Rossides set a program record with five touchdowns in a win over Cornell.

In 1947, Rossides helped lead Columbia to a monumental 21-20 victory over Army. The win snapped the Black Knights’ 32-game winning streak.

Eugene Telemachus Rossides (his middle name was for the son of Odysseus and Penelope in the “Odyssey”) was born in Brooklyn on Oct. 23, 1927. His mother, Anna (Maravel) Rossides, was a native of Sparta, Greece; his father, Telemachus, was a physician of Greek extraction who had come to America from Cyprus.

His father died of pneumonia when Gene was a month old, and Gene’s mother took a job as a waitress to support him and his 2-year-old brother, Daniel.

He went into private law practice, became active in Republican politics and spent two and a half years as an assistant to the undersecretary of the Treasury in the administration of President Dwight D. Eisenhower.

Rossides later held important roles in the election campaigns of Senators Jacob K. Javits and Kenneth B. Keating, both Republicans of New York.

After heading Richard M. Nixon’s New York presidential campaign office in 1968, Rossides served as an assistant secretary of the Treasury in the Nixon administration from 1969 to 1973, overseeing the Customs Service, the Secret Service and other agencies and enforcing rules on trade and tariffs. He was the first Greek American to be confirmed by the U.S. Senate to an Executive Branch office.

Rossides became a leading voice in the Greek-American community when he founded the American-Hellenic Institute in Washington in 1974. He remained with the organization as a board member into his later years.

With profound sadness @TheAHIinDC announces the passing of its founder/former president, Gene Rossides. A proud American who never lost sight of his ancestry, championed & inspired a generation to advocate for the #RuleofLaw, #Hellenism & #JusticeForCyprus https://t.co/ae8QnnzGI4 pic.twitter.com/rTrMyEidwC

In the wake of the Turkish invasion of the Republic of Cyprus in 1974, Rossides founded AHI to advocate for US interests in U.S.-Greece-Cyprus relations. He was the architect of the most substantial policy victory for the rule of law in Cyprus which was achieved with bipartisan support — the United States embargo on transfers of US arms to Turkey which took effect on February 5, 1975 and remained in effect until 1978.

Mitsotakis announced on Thursday that he will bring about new legislation to tighten sex abuse laws and help victims, while endorsing the #MeToo movement.
Greek News