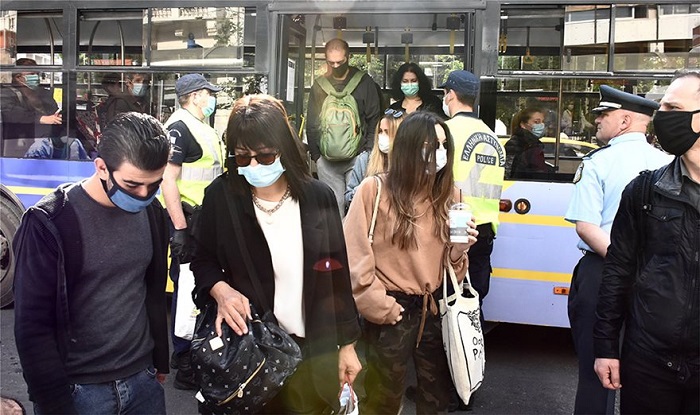 Greece partially opened up on Monday with the opening of small retail stores and hairdressers and the free movement of people within the prefecture of their permanent residence.
Greeks took the first tentative steps back to normal life after more than 40 days of quarantine, duly wearing their face masks and keeping appropriate social distances from one another.
The first nonessential businesses in Greece opened as part of what authorities have said will be a staggered reopening of the economy. Hair salons, barber shops and stores selling books, sporting goods, stationery and other items can now open, albeit with strict hygiene and social distancing measures in place.
Traffic volumes increased on the streets of Athens and other large cities, and queues formed outside electrical appliance shops, which were also allowed to open for the first time since Greece imposed its tough blanket lockdown in mid-March.
Police and municipal officers in Athens, Thessaloniki and other cities were out in force at major public transport hubs to ensure compliance.
Travelers not wearing face masks were asked to disembark, while half of the seats in buses and trains were out of bounds to ensure social distancing.

The vast majority of passengers are wearing masks — not least because a stiff fine of 150 euros is envisaged for those who flout the new rule.
As of Monday, the use of masks is mandatory or strongly recommended in enclosed spaces such as hospitals, supermarkets, and grocery stores, retail and other shops, public transport, and taxis. This is especially true in areas where there is close physical contact, such as at hairdressers, barbershops and salons, as well as driving license schools.
As Greece makes its transition from the “stay home” containment policy to the “stay safe” campaign, authorities warn that the danger of a rebound of the pandemic is not over.
The “stay safe” phase is much more complicated, harder to grasp, and even harder to impose than the initial complete lockdown.
Greece has reported 145 coronavirus deaths and over 2,600 infections. Almost 80,000 tests for the virus had been carried out as of Monday.