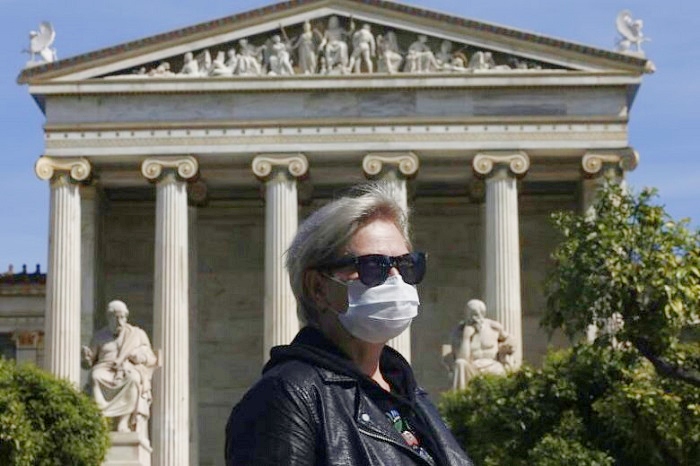 Greek authorities announced ten new confirmed coronavirus cases in the country on Monday, as the first results of an ongoing study conducted about the benefits of colchicine in treating the COVID-19 coronavirus were described as “very encouraging.”
Epidemiologist Sotiris Tsiodras, who is also the Health Ministry’s coronavirus spokesman, said that the total number of confirmed coronavirus cases in Greece, including those who have recovered, has reached the number 2,245.
Sixty-one individuals are currently being treated in the country’s intensive care units, and the total number of those who have succumbed to the disease is 116. The latter figure yesterday stood at 110.
Tsiodras noted that the majority of the population is still not immune to the disease, something that add complexity to the future situation as the nation and the world begin to emerge from the first waves of the virus.
Greece has recorded roughly eleven deaths per one million of its population, which makes the country 58th worldwide and 21st in the EU.
Scientists Say Trial Treatment of COVID-19 Study ”Very Encouraging”
The first results of an ongoing study conducted in Greece about the benefits of colchicine in treating the COVID-19 coronavirus are “very encouraging,” according to a statement issued by the scientist heading the trial recently.
“The data we analyzed up until last night are very encouraging,” Christodoulos Stefanadis told AMNA news agency on Monday.
Stefanadis is a cardiologist as well as a professor in the Athens Medical School.
The study has been carried out on 120 patients over the last couple of weeks, with half of them receiving the drug and the rest as the control group.
Some of these encouraging findings, according to Stefanadis, include a drop in levels of the C-reactive protein inflammation marker, in disease-fighting white blood cells called eosinophils and in troponin, which measures damage to the heart.
“All of this evidence appears to point to it being a very important drug for helping coronavirus patients who are at risk from catastrophic complications, like a shutdown of the heart or lungs,” Stefanadis said.
“What we know right now is that hospital patients taking colchicine are showing a statistically significant reduction in inflammation compared to those who are not, regardless of whether they have heart problems,” Stefanadis said.
“For years we have known that colchicine is a very cheap anti-inflammatory medicine that helps treat pericarditis,” he added, referring to the inflammation of the sac surrounding the heart. “That is how the idea of studying in on coronavirus began.”
Stefanadis warned, however, that it is too soon to draw any definitive conclusions, adding that the Greek team’s findings will be sent to international medical journals to be peer-reviewed.
A similar trial with colchicine is also being carried out in Canada, Stefanadis noted, where approximately 6,000 patients are receiving either colchicine or a placebo drug for 30 days.