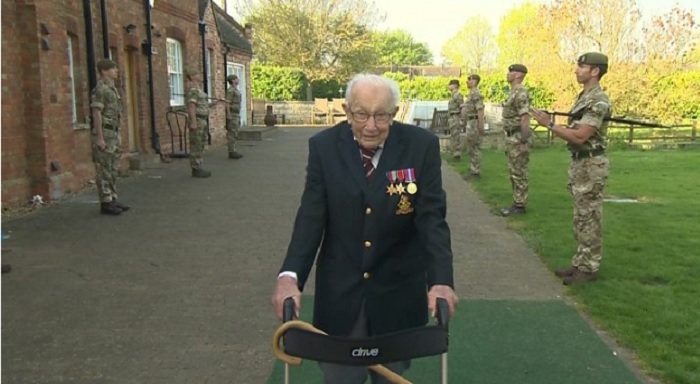 Captain Tom Moore originally wanted to raise £1,000 for the NHS’ “Charities Together” by completing laps of his garden before his 100th birthday.

But he smashed his target after more than 650,000 people made donations to his fundraising page.

As he finished the challenge, Capt. Moore said: “I feel fine, I hope you’re all feeling fine too.”

Captain Moore told the BBC earlier that the total amount raised so far was “an absolutely fantastic sum of money”.

“I never dreamt I would be involved in such an occasion as this,” he said at the end of his final lap.

By midday, Capt. Tom’s JustGiving page, which temporarily crashed shortly after he finished the challenge, was showing donations of £13m.

His daughter, Hannah Ingram-Moore, said “We are absolutely floored by what has been achieved but we’re so happy, so humbled and so proud.

“He’s a beacon of hope in dark times and I think we all need something like this to believe in and it’s for such an amazing cause.”

Capt. Moore began raising funds to thank the “magnificent” NHS staff who helped him with treatment for cancer and a broken hip.

With the aid of a walker, he completed 100 laps of the 25-meter (82 foot) loop in his garden in Marston Moretaine, Bedfordshire, in 10-lap chunks, well before his birthday on April 30.