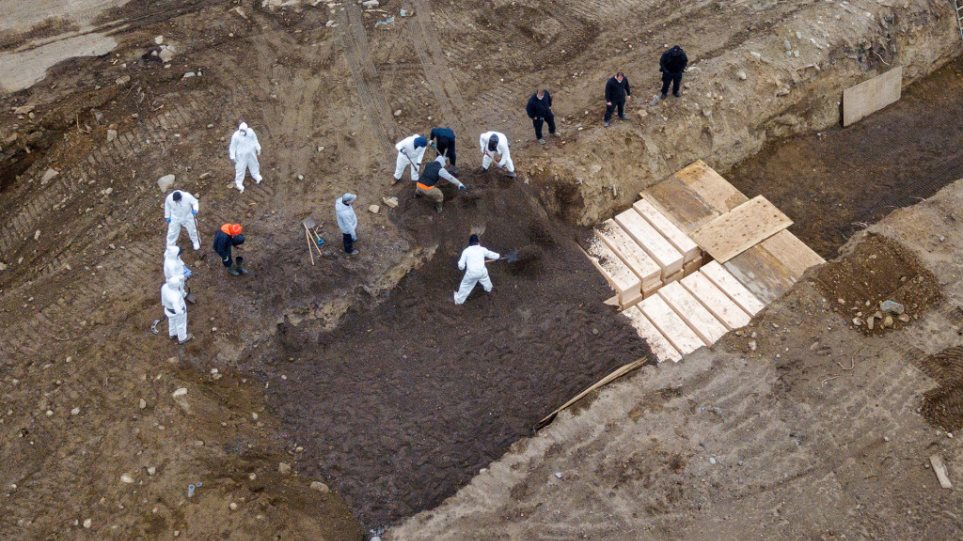 New York state now has more coronavirus cases than any other country outside the US, according to the latest figures on Thursday.

Drone footage showed workers using a ladder to descend into the huge pit where the caskets were stacked.

The images were taken at Hart Island, off the Bronx, which has been used for more than 150 years by city officials as a mass burial site for those with no next-of-kin, or families who cannot afford funerals, known historically as a pauper’s cemetery or “potter’s field.”

While New York state leads the world in the number of coronavirus cases overall, its death toll (7,000) lags behind those of Spain (15,500) and Italy (18,000), although it is more than double the official figure from China (3,300) according to government sources there.

New York Gov. Andrew Cuomo on Thursday urged residents of his state to continue to stay home and practice social distancing in order to quell the spread of COVID-19.

“9/11 was supposed to be the darkest day in New York for a generation,” Cuomo said at a Thursday press conference. “And then, in many ways, we lose so many more New Yorkers to this silent killer.”

"9/11 was supposed to be the darkest day in New York for a generation," Gov. Andrew Cuomo said at his Thursday coronavirus briefing.

"And then, in many ways, we lose so many more New Yorkers to this silent killer."https://t.co/tEXhjVlsau pic.twitter.com/ikvi98Yc1h

A Greek physician who works at Montefiore Medical Center in the New York City borough of the Bronx described to Greek Reporter earlier in the week the unprecedented situation. “I will not describe it as chaos, but this is a very difficult situation,” he said.

“The hospital is at the breaking point, but thankfully indications are that the spread of the disease is at its highest point,” says Leonidas Palaiodimos, who admits that he feels the stress. However, he adds, he is not frightened, telling Greek Reporter, “I simply do not have the time to feel scared.”