Greece Flies Spanish Flags in Solidarity to the Coronavirus-Stricken Country

By Tasos Kokkinidis
April 10, 2020
Facebook
Twitter
WhatsApp
Linkedin
Email
Greece has shown on Friday its solidarity and support to the Spanish people who are suffering from the coronavirus pandemic by hoisting the Spanish flag at the Greek Parliament and the Ministry of Foreign Affairs.
The symbolic act came as Spain has reported 605 new deaths from coronavirus, the lowest daily tally since March 23, bringing the total death toll in the country to 15,843 while cases rose by 4,576 to a total of 157,022 infections.
Based on a decision by Parliament President Konstantinos Tasoulas, the parliament building will fly the Spanish flag for the next three days, while the parliament building will be illuminated with the colors of the Spanish flag.
At a symbolic event held at the Greek parliament, Tasoulas accompanied Spanish Ambassador Enrique Viguera to the monument of the Unknnown Soldier, where they paid tribute to the national emblems of both countries in the presence of Foreign Minister Nikos Dendias and Alternate Foreign Minister Miltiadis Varvitsiotis. 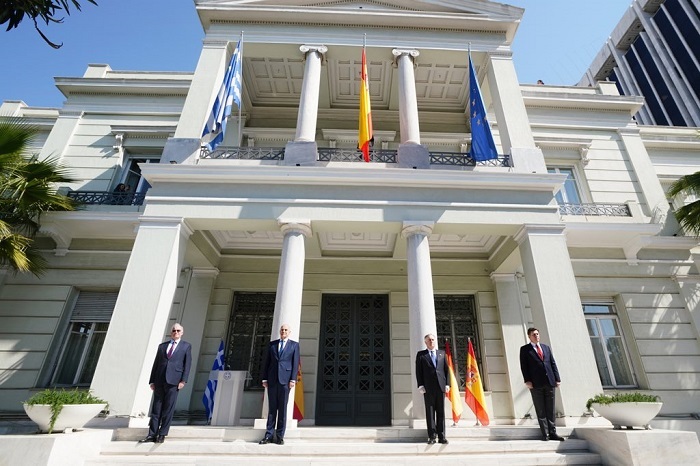 The parliament president earlier on Friday attended a similar event at the Foreign Ministry in Athens.
Last week Greek authorities raised the flag of Italy on public buildings in Athens in a rare move of solidarity with their suffering neighbors in Italy.