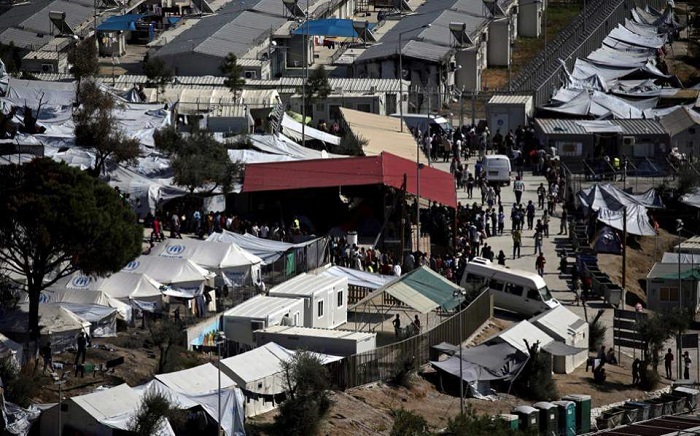 The migrant camp at Moria, on the island of Lesvos, the largest in Greece, is a “time bomb” waiting to explode as the coronavirus has spread to the local population, an official from the group Doctors without Borders (MSF) warned on Thursday.
Speaking to Greek Reporter, spokesperson Anna Pantelia said after six cases of coronavirus were recorded among the local islanders, “it’s a question of when the virus will spread to the Moria camp,” home to about 20,000 migrants and asylum seekers.
Greek authorities and NGO’s are particularly concerned about the possible spread of coronavirus to migrant camps in the northern Aegean after twenty-three asylum-seekers tested positive for COVID-19 at the Ritsona camp on Evia.
“If the virus reaches the camp, it would be a disaster,” explains Pantelia. “Hygienic conditions are very poor as there only one sink for 1,300 people, there is shortage of soap, and in many cases five or six family members share a single tent.”
“Social distancing in Moria and other refugee camps is practically non-existent, which would make a single case spread like wildfire,” she tells Greek Reporter.
This is a problem openly acknowledged by the Greek authorities. On Thursday, Sotiris Tsiodras, the Health Ministry spokesman for the coronavirus, said that “in closed populations there is an increased chance of spreading and transmitting of the virus. Transmission and the ‘attack rate’ are very high in these situations.”
The MSF spokesperson claims that although Greece has imposed strict measures to contain the spread of the virus, it has still not taken enough consideration of the special needs at migrant camps.
“There are not enough doctors. At Moria there are just four doctors for all these people. On addition, there are very few translators that explain possible symptoms to medical staff.”
Movement in and out of Moria has been restricted, with a complete lockdown between 7 p.m. and 7 a.m. Police are blocking traffic to the camp and allow passage only to those who work there.
Since there have not been any new transfers to Moria since March 1, when Greece announced that it will not accept new asylum applications, if the virus hits the camp it will be from a local person or somebody who works in the camp, Pantelia says.
The Greek Health Ministry has announced that more doctors and nurses will be hired to work in the camp. Already, a container has been set up just outside the perimeter of the camp as a headquarters for doctors and nurses who monitor for possible instances of coronavirus.
MSF has also established a separate section in its own clinic also just outside the camp to deal with people who are showing symptoms of the disease.
“These are positive steps but more is needed to avert a catastrophe,” says Pantelia.
“Sanitation must be improved immediately, more medical staff and translators should be hired, and space must be created inside the camp where people with coronavirus symproms can isolate, before it’s too late.”
The MSF official also notes that although about 40 percent of the residents are young children, who are unlikely to fall seriously ill if they contract the Covid-19 coronavirus, there are hundreds of older people with underlying health problems who must be moved out of the camp.