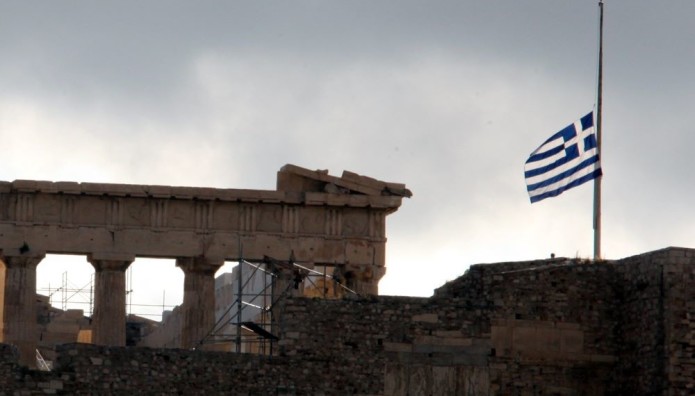 The Greek flag on the Acropolis is flying at half staff on Wednesday as a mark of respect for the day WWII resistance hero and politician Manolis Glezos is to be laid to rest in Athens.
Glezos, who died on Monday at the age of 97, first earned renown for taking down the flag of the Nazi occupiers of Greece from the Acropolis. The teenager, with the assistance of another young friend, crept up the slopes of the Acropolis at night in order to take down the flag that would be raised at daybreak.
Prime Minister Kyriakos Mitsotakis, who had made the request for the flag to be flown at half staff, said the gesture was a tribute to “a great Greek.”
Among the many people expressing their condolences was President of the Hellenic Republic Katerina Sakellaropoulou, who hailed Glezos as “a brave man, a symbol of the resistance against Nazism and an uncompromising defender of social justice… a pure patriot in every sense of the word.”
“He will remain in our memory as an iconic figure of our modern history,” she added.
Main opposition SYRIZA leader Alexis Tsipras emphasized that Glezos had “fought to the last” and that “Greece, democracy, social justice have lost a great fighter of the front line,” who will “go down for eternity as a symbol of a fighter who knew how to sacrifice himself for the people.”

The Start of Greek Resistance to the Nazis

On May 30, 1941, two young men made a heroic move that later proved to be the beginning of the great Greek resistance to the Nazis

Posted by Greek Reporter on Wednesday, 30 May 2018