GRNews
GreekReporter.comGreeceThe Scientist All Greeks Listen to in the Coronavirus Era

The Scientist All Greeks Listen to in the Coronavirus Era 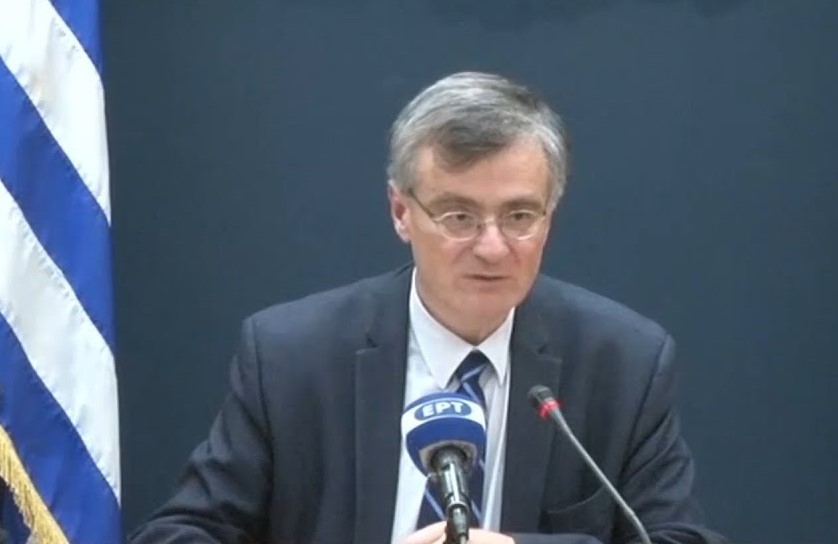 Greece is likely going through its most trying period since the Civil War, as the invisible enemy called COVID-19 is inside the bodies of many Greeks and no one knows how many will finally succumb to the deadly coronavirus.
Usually, in such dark times, people cling on to someone who sells hope, who appears optimistic and claims he has easy solutions to problems that are extremely difficult to solve.
Yet, amidst the fear of the deadly unknown and the pictures of convoys of Italian army trucks carrying dead bodies, there is one man who appears daily on television, to give the horrifying tally of this many dead, this many confirmed cases, and this few recovered.
Along with the terrifying count, come words of warning, of sad realizations, of painful truths. “Please stay at home,” the man’s voice says, in many different ways, but never in an authoritarian tone.
Every evening at 18:00 Greeks turn on their television sets to listen to this man and hang on to his every word.
This man is Sotiris Tsiodras, the most popular man in Greece at the moment, even though he has yet to say anything that sounds good to the ear. On the contrary, he says that we are all in danger. He is so popular that there are few of the opinion that he would make a great prime minister or a president of the republic at least.
In fact, French newspaper Le Figaro wrote a tribute on him entitled “Infectious Disease Specialist Sotiris Tsiodras is the New Favorite of the Greeks.”
He has grey hair, wears glasses, is conservatively dressed and his voice is soft and soothing, but sincere. He is Director of the Infectious Diseases Committee, the task force with the mission to fight COVID-19 and inform the public about the developments in the spread of the pandemic.
His impressive resume makes him most suitable for the job and his reassuring demeanor and personality make him the ideal person for this most difficult task.
He was born on October 13, 1965, in Sydney, Australia. He began his hospital training at 401 General Army Hospital (1992-1993). It was also the beginning of his specialization in Internal Pathology.
After completing his nine months of field service, he continued his studies in the United States where he stayed for seven years and completed his postgraduate education.
He spent three years at the Department of Internal Pathology at Albert Einstein University Hospital, where he gained significant experience in ICUs and the treatment of infectious diseases. At the same time, he was teaching at Temple University Medical School.
His experience secured him a place as an Infectious Disease Specialist at Beth Israel Deaconess Medical Center, the teaching hospital of Harvard Medical School. He was the only candidate from a foreign country accepted.
During his four years in the hospital complex, he was trained in the clinical follow-up of a wide range of patients with infectious diseases, including patients with complex infections in the immunosuppressive territory.
In November 2000 he was awarded the title of Specialist in Infectious Diseases after successfully attending the Certification Examinations of the American Board of Internal Medicine subspecialty of Infectious Diseases.
Upon his return to Greece in 2001 he started working as an infectious disease specialist at the Center for Disease Control and Prevention KEELPNO.
In 2005 he participated in the organization and planning of the influenza pandemic measures and in completing the National Pandemic Plan as a member of the authoring team. He also participated, as a specialist in public health, in 4-member committees of the European Center for Disease Control and Prevention (European CDC), which inspected member states of the European Union in preparation for a national influenza pandemic (Italy and Hungary).
As an Infectious Disease Consultant at KEELPNO, he was actively involved in dealing with daily clinical problems of infections but also in investigating epidemics such as the myocarditis epidemic in Crete in 2003; Salmonellosis in Argos in 2004 the suspected human cases of HSN1 influenza in 2005-2006 as well as the 2009-2010 influenza pandemic, malaria, and West Nile epidemics in 2010-2012 and the rabies epidemic of animals in Northern Greece in 2012-2013.
On Saturday, the man whom Greece listens to with bated breath every evening, was teary-eyed when advising people to stay home to protect the elderly from the infection that could lead to their death.


Other than a great scientist, Tsiodras is also a religious man. He is a cantor at church and on Saturday he chanted at the Church of the Resurrection of Christ at Spata, in an empty church because of the coronavirus prevention measures.