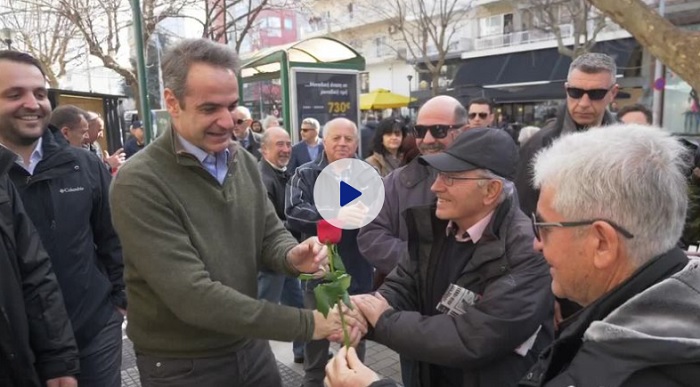 Greece will allow no one to illegally cross onto its territory, Prime Minister Kyriakos Mitsotakis vowed on Tuesday as he toured Alexandroupolis and other border towns in Evros, close to the Turkish border.
“Our morale is high and we are doing our job, with society united, as this is a national effort. Nobody will enter illegally,” Mitsotakis declared, sending a clear message that Greece will not be coerced nor blackmailed.
“The borders of Greece are the borders of Europe,” he added.


Mitsotakis also visited the border post at Feres, where he was briefed on the situation currently unfolding along the border in Evros.
The border police stated that the greatest pressure has now been transferred to the southern Evros area, while they reported that 1,000 people attempted to enter Greece en masse during the night but were thwarted in their attempt.
During the briefing it was reported that Turkish authorities are now transporting people in buses to specific points in order to increase the pressure placed on the Greek border. However, the Greek authorities are supervising all entrance points and have control of the situation, they said.

Meanwhile, it emerged that Turkish President Recep Tayyip Erdogan has refused to attend a meeting with Mitsotakis in Sofia, Bulgaria on March 6 upon the initiative of Bulgarian Prime Minister Boyko Borisov.
Turkish media are reporting that on March 2 Borisov suggested that he should host a trilateral summit in Sofia with the participation of Turkey and Greece; yet Erdogan flatly turned down his offer.
According to the same reports, Erdogan canceled the meeting, claiming that Greek police had killed two Syrian refugees on the Turkish-Greek border, a claim rejected by Athens as completely “fake news.”
“No shots have been fired by Greek border forces against any individuals attempting to enter Greece illegally. The contrary amounts to no more than gross and deliberate misinformation: Fake News. #fakenews #fakeTurkishPropaganda”, government spokesperson Stelios Petsas said in a tweet on Monday evening.