Hundreds of Migrants March Towards Greece As Turkey Opens Gates

By Tasos Kokkinidis
February 28, 2020
Facebook
Twitter
WhatsApp
Linkedin
Email
A large group of migrants and refugees began marching on Thursday evening from Turkey to the Greek border after Turkey announced that it will no longer stop Syrian refugees from reaching Europe.
The DHA news agency reports that there were approximately 300 migrants, including some women and children, in the group which began heading toward the border in Turkey’s Edirne province around midnight. Syrians, Iranians and Iraqis were among those marching in the group.

The first immigrants to leave Turkey for Europe.

Turkish authorities do not block anyone from leaving.

All immigrants are free to go as can be seen in the video.#syria #turkey #immigrants pic.twitter.com/sUAy5a5spQ 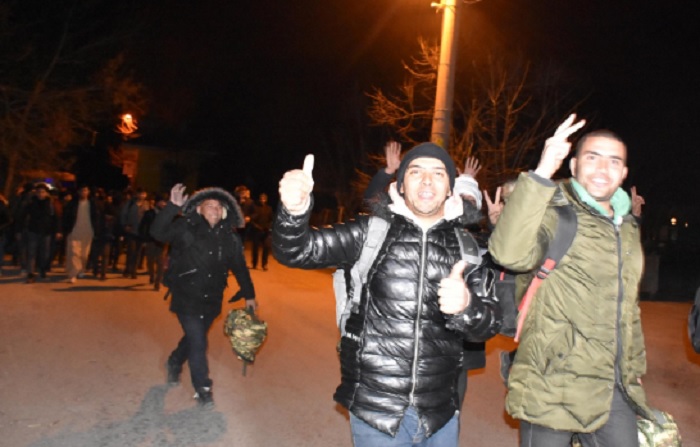 The mass caravan toward Greece formed after a decision taken at an emergency meeting chaired by President Tayyip Erdogan earlier on Thursday which ordered the Turkish police, Coast Guard and border security officials to stand down and let refugees pass through to Europe.
“Turkey can not bear the pressure of the new refugees; we now say that Turkey is at full capacity,” ruling AKP spokesman Omer Celik told CNNTurk early on Friday. While the spokesman noted that Turkey’s refugee policy remains “the same,” he said “we are no longer in a position to hold refugees” amid an expected influx of newly-displaced Syrians.
The move runs counter to the 2016 Turkey-European Union agreement which obliges Ankara to attempt to stop migrants from crossing the Aegean. Analysts say that it also puts pressure on EU countries to side with Turkey in its Syria adventure.
Greece’s neighbor is now faced with a new migrant wave as the war on the Syrian front intensifies. Approximately one million civilians have been displaced towards the Turkish border – more than half of them children – since December 2019, when forces loyal to President Bashar al-Assad began staging an offensive.
At least 33 Turkish soldiers were killed in an air strike by Syrian forces in northwestern Syria on Thursday. Syrian forces supported by Russia are trying to retake Idlib from rebels who are backed by Turkish forces.
The Turkish soldiers’ deaths constitute the largest number of fatalities suffered by Ankara’s forces in a single day since it began deploying thousands of troops into Idlib in recent weeks in a bid to halt the military push by Assad’s forces and their allies.