Ancient Greeks' Love for Their Dogs

Ancient Greeks had a great love and respect for their dogs, cherishing them as companions, protectors, and hunters, as evidenced by several dog tombstones discovered over the centuries.
The most well-known story about the relationship between ancient Greeks and their pet canines comes from Homer and his “Odyssey.” Written as early as c.800 BC, it is a story of the unending loyalty of dogs to man.
Argos (“The Slow One”) is the loyal friend of King Odysseus. His master finally returns home after being away on his adventure for 20 years, and is not recognized by the hostile suitors who are vying to win the hand of Odysseus’s wife, Penelope. But Argos recognizes his master and rises up from where he has been faithfully waiting, wagging his tail in greeting.
Odysseus, however, is in disguise and he is afraid that if he acknowledges the greeting, he will give away his true identity in front of the suitors; so he ignores his old friend, and Argos tragically lays back down and dies.
The great philosopher Socrates himself saw wisdom in dogs.
He claimed that dogs are true philosophers because they “distinguish the face of a friend and of an enemy only by the criterion of knowing and not knowing” and concluded that dogs want to learn things because by learning they determine what they like and what they do not based upon knowledge of the truth.
Socrates said that the dog has learned who is a friend and who is not and, based on that knowledge, responds appropriately; while human beings are often deceived as to who their true friends are.
The Philosopher Diogenes of Sinope, who lived from 412 – 323 BC called himself “The dog.” Explaining why he chose the name of an animal for himself, he replied: “Because I fawn upon those who give me anything, and bark at those who give me nothing, and bite the rogues.” 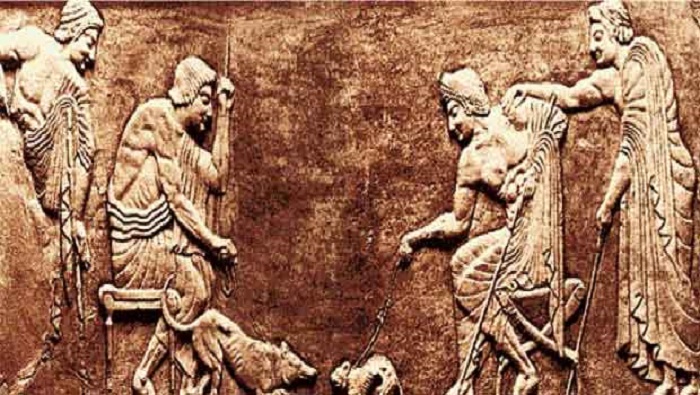 How Ancient Greeks named their dogs
Ancient Greeks built the Parthenon, became philosophers, wrote the world’s greatest tragedies and comedies, and overall laid the foundations of Western Civilization — yet apparently they had a hard time choosing names for their beloved dogs.
Nowadays, we usually just pick a name we like, which reminds us of something or has some pleasant meaning for us. At that time, however, there was a far more complex way to choose a name for your dog.
According to Xenophon, the dog names preferred by the ancient Greeks were short, consisting of one, or at most two, syllables. They also paid special attention to the meaning of the name of the dog and no name was ever bestowed at random or on a whim.
The reason for this was that a dog’s name also affected the owner’s psychology. So ancient Greeks chose names which expressed courage, power, speed, appearance or other material or spiritual values. The name Xenophon himself chose for his own dog was “Impetus” (Ορμή).
Atalanti, on the other hand, the famous hunter of Greek mythology, named her dog ‘Avra’ (meaning aura or breeze). Other notable dog names of antiquity that we know of are Impetuous  (Ορμητικός), Follower (Μεθέπων), The One Who Awakens You (Εγέρτης), Crow (Κόραξ), The Shining One (Λάμπρος), Good Shooter (Εύβολος), and, of course, Odysseus’ faithful dog Argos.
The list of dog names from antiquity was supplemented by Polydeuces, who also mentioned names such as White (Λευκός), Ink (Μελανός), Flower (Άνθος), Storm (Θύελλα), Hunter (Κυνηγός), Digger (Σκαφτιάς) and Guard (Φύλαξ). 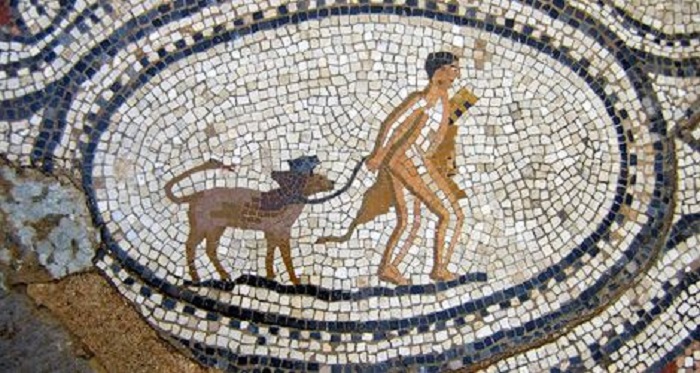 Ancient Greeks’ love for dogs engraved forever on gravestones
After their loyal friend and companion departed from this world, ancient Greeks were not afraid to express their grief for their loss, openly crying and mourning.
Greeks would bury their pets along the roadside in marked graves, and the entire ceremony for this was undertaken in a very solemn manner.
“This is the tomb of the dog, Stephanos, who perished, Whom Rhodope shed tears for and buried like a human. I am the dog Stephanos, and Rhodope set up a tomb for me” read one gravestone.
“Helena, foster child, soul without comparison and deserving of praise.” The particular epitaph shows that some ancient Greeks, lust like today, saw their dogs as their foster children.
In the next case, a hunter mourned the female hound who had helped him hunt in the three Greek mountains mentioned on the tombstone: “Surely, even as you lie dead in this tomb, I deem the wild beasts yet fear your white bones, huntress Lycas; and your valor great Pelion knows, and splendid Ossa and the lonely peaks of Cithaeron.”
Another tombstone of a beloved family dog from Ancient Greece reads “You who pass on this path, if you happen to see this monument, laugh not, I pray, though it is a dog’s grave. Tears fell for me, and the dust was heaped above me by a master’s hand.”

An English-Greek man had the distinction of being the designer of one of the two most emblematic cars in the world, the Mini Cooper.
Greek church