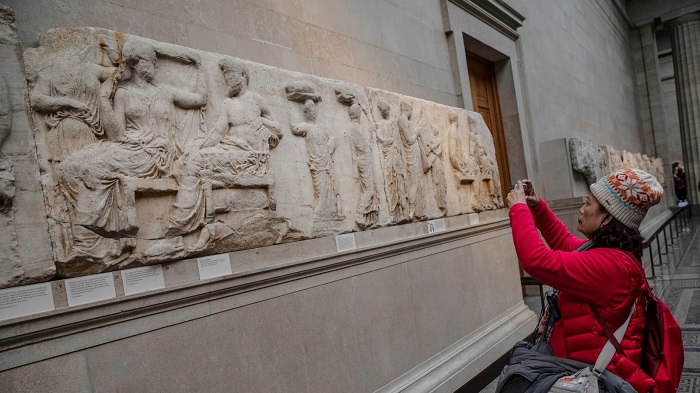 The British government ruled out any discussion of the return of the Parthenon Sculptures to Greece as part of its deal with European Union in the post-Brexit era on Tuesday.

A Downing Street spokeswoman said the sculptures would not be discussed during next month’s trade talks.

She stated ”The EU are still finalizing their mandate – this is currently in draft.

”The UK’s position on the Parthenon sculptures remains unchanged – they are the legal responsibility of the British Museum. That is not up for discussion as part of our trade negotiations.”

A demand for the return of ”unlawfully removed cultural objects” has been included in the EU’s negotiating mandate for trade talks with the UK.

A draft of a document from top EU diplomats leaked earlier on Tuesday shows a clause noting that ”The Parties, consistently with the Union rules, address issues related to the return or restitution of unlawfully removed cultural objects to their countries of origins.”

The European Union’s demand for the return of unlawfully removed cultural objects to their countries of origin did not specify any specific items.

However, an EU official said a request for the clause was made by Greece and is supported by Italy, according to reports from Reuters news agency.

Citing a diplomatic source, the Athens Macedonia News Agency (AMNA) reported that the clause has “nothing to do” with the Greek-British dispute over the Parthenon Sculptures.

“The purpose of this article is to ensure that stolen cultural property located on British soil is automatically returned,” the source said.