By Nick Kampouris
February 13, 2020
Facebook
Twitter
WhatsApp
Linkedin
Email
Greek Prime Minister Kyriakos Mitsotakis welcomed a group of youths who have managed in the recent past to overcome cancer and return normal life to his office at the Maximos Mansion today.
Mitsotakis gave a warm welcome to the young survivors and their relatives and had the opportunity to discuss their experiences with them in an extended meeting.
The Greek PM said that he was committed to satisfying their longtime demand for the establishment and operation in Greece of a “National Registry of Neoplasm for Childhood and Adolescence.”
It is hoped that this institution would promote the prevention, monitoring and combating of childhood cancer in a systematic way, as is the case in all advanced state-organized health systems. 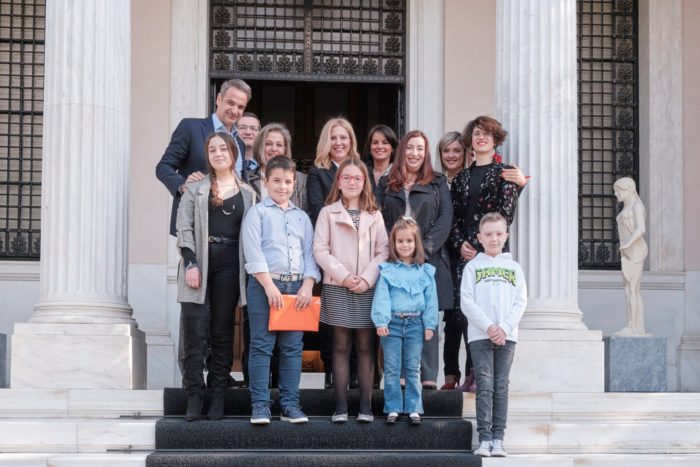 The Prime Minister listened to the children’s personal stories and talked extensively with them about the support that both the children who are going through this difficult ordeal and their families need – not only during, but also after, treatment.
“I wanted to tell you from the bottom of my heart how proud I am of what you have accomplished, of the fight you gave, of the fact that you came out victorious, and how important it is to have your families who supported you in this difficult adventure,” Mitsotakis told the young children in his office.
According to official data from the Greek Ministry of Health, every year, 300-350 children and adolescents are diagnosed with cancer and are hospitalized and treated in one of the eight Pediatric Hematology and Oncology Units of the country’s Health System.
Earlier this week, the government announced that it had reduced the VAT rate for all cancer-related medicines and services down to 6 percent from 24 and 13 percent, thus reducing the cost to patients as well as the overall pharmaceutical costs for the country as a whole.