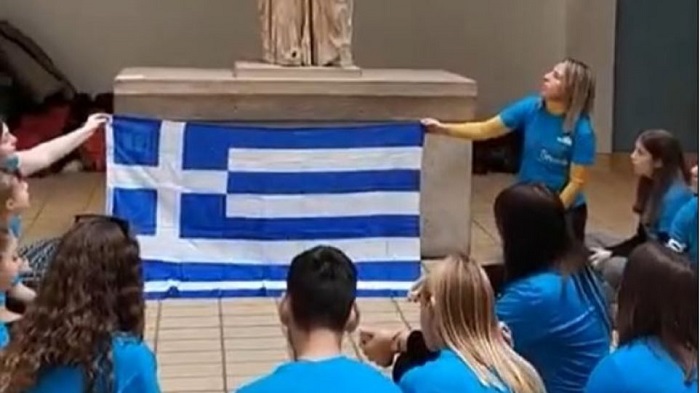 A group of students from a Cretan high school showed their defiance at Britain’s refusal to return the Parthenon Marbles to Greece by singing a traditional song during their recent visit to the British Museum in London.

Students from the town of Gouves are seen in the video sitting in front of a Caryatid, which is part of the collection of the Marbles stolen from Greece by Lord Elgin in the 19th century.

They placed the Greek flag in front of the statue and began singing “Tziaveri,” a Greek traditional song which describes the suffering and hardships experienced by Greek immigrants abroad.

After the United Kingdom left the European Union after 47 years of membership on January 31, Greek Culture Minister Lina Mendoni declared that Athens will step up its campaign for the return of the Parthenon Marbles.

Speaking to Reuters, Mendoni said she believes the circumstances are ripe at this moment for the return of the Marbles, part of the great patrimony of the Greek people.

“It is the mentality that has changed, the fact that Britain is distancing itself from the European family, it is 200 years since the Greek revolution. I think the right conditions have been created for their permanent return,” the Greek Culture Minister stated.