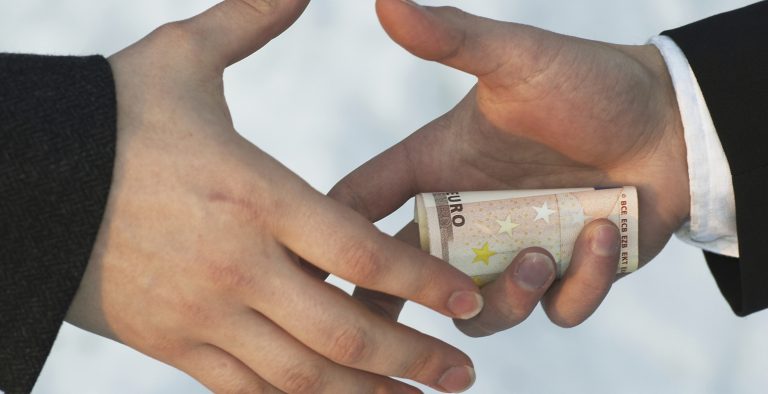 Greece significantly improved its corruption perception ranking in the index published by the Transparency International organization in 2019, scoring 48 points out of 100 and placing in 60th position worldwide.
As recently as the year 2018, Greece had scored 45 points and stood at 87th in the rankings of the most transparent, and hence least corrupt, nations.
Transparency International’s “Corruption Perceptions Index” ranks 180 countries and territories by their perceived levels of public sector corruption, based on the opinions of experts and businesspeople.
Together with Estonia and Guyana, Greece is among the countries which improved its transparency ranking since 2012, while the positions of several nations, including Canada, Nicaragua and Australia, slipped.
The analysis shows that corruption is more pervasive in countries where big money can flow freely into electoral campaigns and where governments listen only to the voices of wealthy individuals or powerful lobbies.
The Corruption Perception Index (CPI) uses a scale of zero to 100, where zero is “highly corrupt” and 100 is “very clean.” More than two-thirds of countries scored below 50 on this year’s CPI, with an average score of 43.
Similar to previous years, the data shows that despite some progress, most countries are still failing to effectively tackle corruption in the public sector.
The least corrupt countries in the entire world, according to Transparency International, are New Zealand and Denmark, with scores of 87 each, followed by Finland (86), Singapore (85), Sweden (85) and Switzerland (85).
The most corrupt nations are Somalia, South Sudan and Syria with scores of 9, 12 and 13, respectively. These countries are closely followed by Yemen (15), Venezuela (16), Sudan (16), Equatorial Guinea (16) and Afghanistan (16).
Europe and Greece
Fourteen of the top 20 countries in this year’s CPI are from Western Europe, including nine countries belonging to the European Union.
Despite being the best performing region, with an average score of 66 out of 100, Western Europe and EU countries admittedly still have their share of corruption.
With 87 points, Denmark is the highest-scoring country in the region, followed by Finland (86), Sweden (85) and Switzerland (85). At the bottom of the region’s rankings are the nations of Bulgaria (43), Romania (44) and Hungary (44).
Neighbors Greece and Italy both fared better in tackling corruption and improving their position over recent years. With a score of 53, Italy increased its standing by 11 points over its 2012 score, while at 48, Greece’s transparency increased by 12 points during the same period.
Both countries experienced concrete improvements in battling the age-old problem of corruption, including legislative progress in Italy with the passage of anti-corruption laws, while both countries established anti-corruption agencies within their governments.