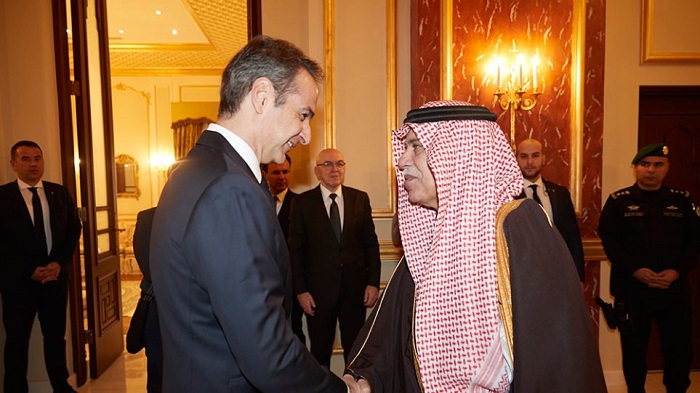 Greek Prime Minister Kyriakos Mitsotakis visited Saudi Arabia and the United Arab Emirates on Monday with a view to attract investments and build alliances to counter Turkey’s expansionist policies in the eastern Mediterranean.
Greek government sources say that during his meetings in the two countries, Mitsotakis will state his intention to sweep away any obstacles to economic cooperation between Greece and the two countries, allowing business activity to thrive naturally.
Greek companies which are outward-oriented are expected to benefit from closer economic cooperation through participation in major development and construction projects in both Gulf states.
The Prime Minister is also expected to discuss geopolitical issues during his meetings, especially the latest developments concerning Turkish provocations in the eastern Mediterranean and its maritime agreement with Libya, which Greece sees as destabilizing and illegal.
Among his planned meetings is that with Saudi Crown Prince Mohamed bin Salman bin Abdulaziz al Saud. On Monday afternoon, Mitsotakis will attend a dinner given in his honor by Saudi Arabian King Salman bin Abdulaziz al Saud, which will be followed by a bilateral meeting in the presence of the respective delegations.
The Greek Prime Minister will depart for Abu Dhabi on Monday night, where he is to meet with Sheikh Hamed bin Zayed Al Nahyan, the head of the Abu Dhabi Investment Authority, followed by consultations with the Abu Dhabi Emirate’s Crown Prince Sheikh Mohammed bin Zayed Al Nahyan.