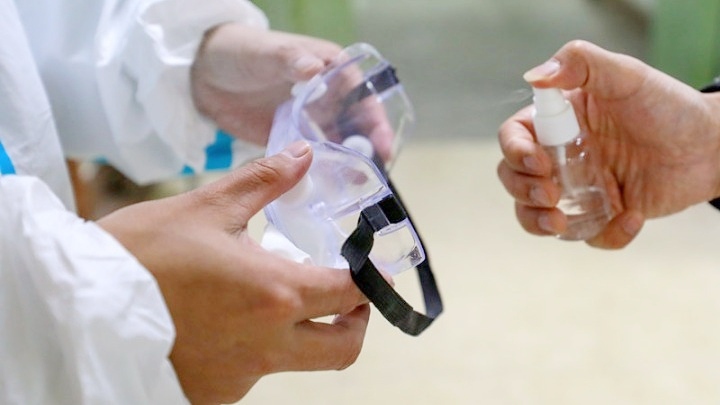 Greece’s Health authorities, as well as its Health Minister Vassilis Kikilias, are in regular contact with the World Health Organisation (WHO), the European Centre for Disease Control (ECDC), European Commissioner for Health and Food Safety Stella Kyriakidou, and the Chinese Ambassador to Greece Zhang Qiyue concerning the coronavirus epidemic, the health ministry announced on Saturday evening.
The Greek authorities have also appointed a spokesperson for coronavirus, Sotiris Tsiodras, who is a professor of Pathology-Epidemiology at the National and Kapodistrian University of Athens and scientific associate of the National Organisation for Public Health.
Health Minister briefed Prime Minister Kyriakos Mitsotakis concerning preparations for dealing with the new coronavirus on Friday and has convened the National Council for Public Health at 11:00 EET on Monday.
In order for the country to be prepared for the near future, the action plan for handling public health crises has been updated and all health authorities are fully operationally prepared.
Thirteen referral hospitals have been announced too, which have designated special quarantine chambers and every health region has at least one referral hospital with a negative pressure chamber.
According to the action plan, all referral hospitals, ambulance crews, and health regions have sufficient gloves, masks and suits and laboratory testing centers have been designated.
Drills simulating the possible admission of a new coronavirus case to a referral hospital, in collaboration with the ambulance service, have been carried out across the country too.
Greece has also taken steps at the entrance points of the country, to disseminate information to travelers and staff about the Coronavirus.
The situation abroad
According to the latest official data from various Health organizations, more than 104,000 cases have been confirmed so far, and at least 300 people were killed by it.
In Asia and the Pacific area, Japan has already recorded 20 cases, with Australia following suit with 12.
In the Americas, 8 cases have been confirmed so far in the US and four in Canada.
In Europe, two confirmed cases have been reported in the UK.
As for the European Union, eight confirmed cases have been reported in Germany, six in France, two in Italy, and one case have been reported in each of the following EU member states: Spain, Finland, and Sweden.
A Greek Returns from Wuhan China
On Sunday a Greek citizen came back to Europe from the province of Wuhan in China, where the virus was firstly located.
The Greek citizen was on board with other Europeans, primarily French and Belgians, and their flight landed in France on Sunday.
After all the necessary medical examinations, the process of his returning to Greece is expected to begin.