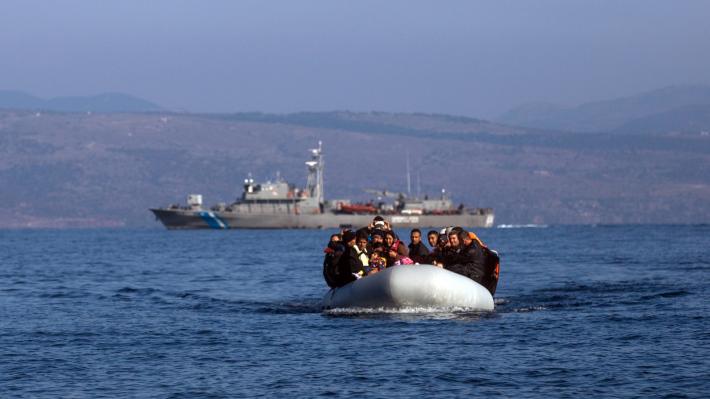 The Greek Defense Ministry opened the bidding process on Wednesday for the installation of a “floating protection system” in the Aegean Sea meant to curtail the huge influx of migrants arriving from the Turkish coast.
The 2.7 kilometer (1.7 mile) long system, which could involve a system of barriers and nets, would be used as an emergency measure by Greece’s armed forces, according to the document.
The specification requires the barriers to be 1.10 meters (3.6 feet) high, of which 50 centimeters (19 inches) should be above the surface and equipped with flashing lights. The Defense Ministry places the cost of the project’s construction at €500,000.

In announcing the bidding process, the Ministry noted that the floating protection system “will restrict and, where appropriate, suspend the intention to illegally enter national territory in order to counter the ever-increasing migration and refugee flows.”
“The invitation for floating barriers is in the right direction… We will see what the result, what its effect as a deterrent will be in practice,” Defense Minister Nikos Panagiotopoulos told Skai Radio.
Greece has struggled to manage the enormous and unrelenting influx of migrants in recent years, keeping many in overcrowded camps on the Aegean Greek islands near the Turkish coast.
More than 40,000 asylum-seekers and migrants are currently crammed into the island camps and are living in such poor conditions that the facilities are repeatedly denounced by aid agencies. The official capacity of all such camps combined is only 6,200.
The conservative government of Prime Minister Kyriakos Mitsotakis has toughened Greece’s approach to asylum-seekers and migrants and is trying to speed up the repatriation of people whose political asylum applications have been rejected.